This is the first level, and Jake will be standing in front of the dog cage after watching the cutscene, where Daisy was dog-napped. Jake will take a few steps forward, and then a boy with a green shirt will run over and tell Jake he's going to race him to the top of the hill. Before you can do so, a tutorial with instructions will appear, saying that the pillar of light shown in Smellovision (SOV) means the boy is carrying a bone. Then, it will go out of SOV, and another tutorial will come up telling you how to move Jake and make him jump.

Catch up to the boy at the top of the hill.

By the time you have exited out of both tutorials, the boy will already be halfway up the hill, so however good you are at the game, you will not be able to catch him. Run up the hill after him, and press

to talk to him. He will tell you that he has beaten you fair and square (although it wasn't actually fair) and ask you if you want to play another game. Jake will reply, "Are you kidding? Does a dog poo in the woods?" and the boy will run off and tell you to follow him.

The boy stops three times, encouraging Jake to follow him some more, and when he stops a fourth time, he starts talking to you. He will says that you could practice your racing skills with Lopez the local Chihuahua, and that he is going to see Gramps, an old man who lives near the roads leading to the Watermill, the Big Field and the Village Houses. The boy will then drop a bone. When you eat it, another tutorial will come up telling you about the uses of bones.

Lopez isn't the biggest of dogs... in fact she's the smallest, because she's a Chihuahua, but that's a good thing, because Jake can certainly smell something inside the farmhouse... but he's too big to get through the doggy door! She only has a measly one bone, and she's not too hard to beat either.

The race goes around the back of the farmhouse and the barn, loops around a tree, goes into the horse paddock, and finishes just after part of the fence where you can either jump over or go underneath it. If you collected at least forty or so of the dog treats and beat Lopez to the finishing line, she and Jake will appear back on the lawn again.

First Lopez will bark, then Jake, and then you will have control of Lopez. While in control of her, go up to the door of the house, and through the cat flap. Inside, you will find a very empty room, with only a bone in it. Pick up the bone, and Lopez will automatically take it to Jake. She will put it on the floor where you can then eat it.

Cheat
If you go out of the level and back again, you can throw the ball through the hoop three times again and another bone will fall.

When you approach the ball next to the pile of logs in front of the barn, Jake will say; "Must... play... with ball." Pick the ball up, and stand roughly where the dust road and the grass meet in front of the hoop. Throw the ball, and if you have aimed it correctly, it will go in. Jake will say something good about it if you make the shot, but if you miss, he will say things like, "Oh, brother, I need to practice," or "Let's face it, I suck big time." Get the ball through the hoop three times (it doesn't have to be three in a row) and a bone will fall down like magic. Then try to pick up the bone without picking up the ball. If you you end up with the ball again, just shoot it away from the hoop then grab the bone.

Drag the bale of hay so you can jump on it.

Go inside the barn, through either the door or the window. Then grab the handle of the second largest hay bale. First, pull it towards the wall without any windows on it, then pull it towards the wall with the open window on it. The open window is next to the basketball hoop. Stop when you have pulled the bale of hay in between the other two. Now jump onto the smallest one, then the one you were just pulling along, and then onto the biggest hay bale. The biggest bale of hay doesn't have any handles, so you can't move it when on the ground.

Be sure to go into SOV when on the largest bale, because there is a purple scent. If this was the first purple scent you collected, a tutorial will come up telling you that there are fifty purple scents in every level. Quit the tutorial, and jump up onto the ledge where you will find a bone. Eat it, then jump out the small window that you may or may not have noticed from the ground.

Head out to the pier to find the guitarist.

Go along the road for a bit, and when you have come to the bridge across the lake, you may notice a small wooden pier at the side of the road. Kirk Chicken-Brain, a man with a guitar, will be sitting at the end. If you talk to him, he asks you to bring him some batteries; in return he will "toss" you a bone. Using SOV, you can find his footprint trail, and follow the footprints, but they seem to take you all over the place before you actually find what it is you're looking for.

The first battery isn't too hard to get. Next to the pier there is a sort of slope that leads up to the hill where the boy was running around. Instead of going all the way to the top of the hill, go onto the ledge and you will find a tree. Next to the tree, there will be a battery. To get back to the guitar-wielding man, all you have to do is jump off the low ledge and onto the pier.

For the third one, go back to the farmhouse again. Turn left towards the tractor shelter and go behind the wall at the back to find the third battery. Take it back to the man.

The final battery is the hardest to get. Along the side of the lake there is a path; follow it, and you will come to the waterfall. There are three ledges here. Jump onto the first one, and go into SOV to find a purple scent on it. Switch back into normal mode again and jump onto the ledge nearest a secret cave behind the waterfall. Finally, jump into the cave, and pick up the battery. To give it back to the man, jump down to the ground from any of the ledges, and swim back over to the pier.

Get onto the lake's edge, shake three times (to get clean) and go along the pier. The man will now give you a bone. 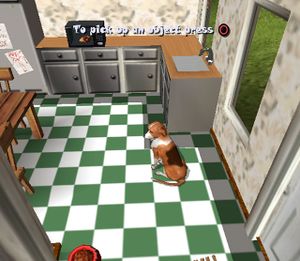 You can get inside the farmhouse from the open door at the back. You'll find some food inside!

Go back up to the top of the hill, and go into Smellovision. You can now find the bone buried in the ground. Repeatedly press

to dig it up. Then, see if you can find all fifty purple scents, mainly on the hill. Here are the other locations:

Tip
If you get stuck looking for them, press

The yellow scents are mainly around the outside of the horse paddock, two of them are at the side of the road. Get all eight of them, and you can do the peeing challenge with Lopez. There are six squares in the grid in this level, and you need to "capture" three of them to beat Lopez. When you have beaten her, a bone will appear in the dog bowl.

There are four red scents. One on either side of the tractor, and one of each of the roof sections of the shelter. Now, you can do a Doggy Do challenge with Lopez to learn Beg 1.

After winning the challenge you can try out the begging move on a human. 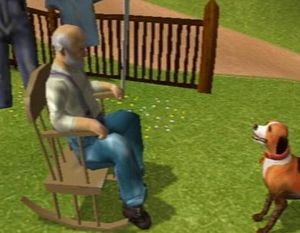 Wake up Gramps if you want that bone.

Go along the road, across the bridge, and into the garden of the old house, and you will find the boy and Gramps. Bark (

) to wake Gramps up, and after a lot of talking, he will ask what tricks you can do. First he will tell you to sit (

). He will then drop a bone, but you will have to wait until he has finished talking to eat it. He will say that he doesn't know where Daisy is, and asks Jake if he can track her down (that's what he's doing anyway). Once you can control Jake again, eat the bone that Gramps dropped and then the ones in the dog bowl. Before leaving the farmhouse, go into the kennel to save the game.

Go back to the bridge, but do not cross it. Instead, turn left and go along that road. You have now arrived at the Watermill.