These are the contests which you will need to do to gain control of the local dog, which is required to complete many of the missions or tasks set by humans. They are triggered by collecting eight scents of a specific colour.

Follow the trail of dog treats and get to the finish line before the local dog.

If you collect 8 green scents then you will be taken to another part of the level. Jake will have to race the local dog along a trail of dog treats, collecting at least 50% of the treats and beating the other dog across the finish line to win. A number of shortcuts can be taken in these races, because as long as you have over half the dog treats you can just run straight to the finish line with a guaranteed win. 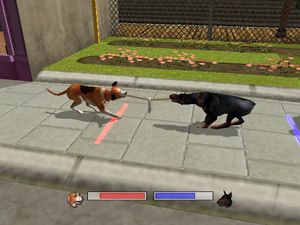 Pull the knot over the red line to win.

This is just a basic game of Tug-O-War between Jake and the local dog. This sub-game is triggered by collecting 8 orange scents. You increase the strength of Jake's pull by pressing the

button as fast as possible. To win the contest, try to pull the tiny ball in the middle of the string over the red line.

Fact
In the Mountain Slide area, Jake can beat the St. Bernard in this game. 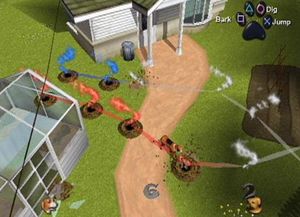 Dig at each smoke-marked location on the line.

Dogs are great at digging. If you collect 8 cyan (light blue) scents, you will be situated in front of a line of digging spots, which resemble the shape of scents in SOV. You must dig your way to the end of the trail before the local dog gets there by pressing the

button repeatedly at each digging spot (the same as digging for bones). 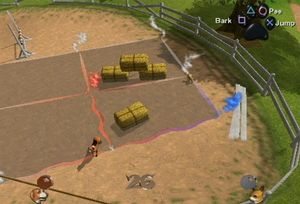 Pee on the marked areas to beat the local dog.

Collect 8 yellow scents and Jake and the local dog will appear next to a course with lots of scent marking spots (also resembling scents) and you need to capture areas to win the game. You can do this by urinating (by pressing

) on all the spots around one of the shapes on the course, but at the same time the local dog will also be trying to capture areas, and can even pee on top of Jake's to try and win. You can pee over your opponent's as well though. However, you cannot "recapture" areas, once an area has turned either red or blue. The first dog to reach the required number of points (located at the bottom of the screen) wins.

Collect 8 pink scents, and you basically need to catch the local dog before the time runs out. There is a timer in the top left corner, and a distance meter (to tell you how far away you are from the local dog) at the bottom of the screen. It is easy to get the two meters mixed up if you don't know which one's which.

These challenges involve the collection of scents.

if you are missing some scents.

In each area (apart from the Dog Pound and the Finale), there are 50 purple scents scattered throughout the level. Collect them all and a bone will appear in the dog bowl.

This challenge is similar to the blue scent challenge. In some areas there will be one violet scent. Get it, and this time all the other violet scents will appear. Collect them all before the time runs out, receiving a little bit of extra time for each one, and you will get a bone in the dog bowl. 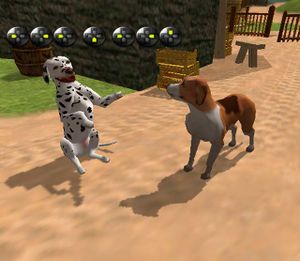 Watch the local dog and perform the same movements to learn a new Beg.

This isn't really a Top Dog contest, but it does include the local dog. Collect four red scents and you will need to copy the Doggy Do moves of the local dog. If you make a mistake, you'll have to start over. If you make it through to the third round, the last move the local dog does will be a new Beg move. Do every single action correctly and you will learn the new Beg and can beg for treats from some of the nicer characters.