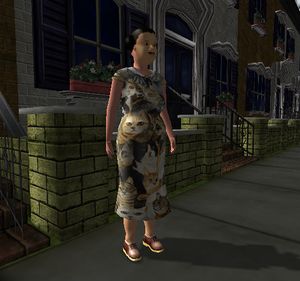 The lady who has lost her kittens can't catch them by herself.

When you arrive at this level, switch to SOV and you'll see numerous purple scents lying around the road. While looking for them, don't go near the entrance to the Dog Pound, or you'll be chased by the Doberman. You will find a lady standing outside her front door, just down the road from the road leading to the Boom City Centre. If you go and talk to her, she will tell you that her kittens have run away and she's too slow to catch them. Jake isn't much help with this, because when he goes over to a kitten and tries to pick it up, it will turn around and hiss. Jake will say, "Ow, that hurt my nose, these guys are tougher than they look. Maybe the local dog can help."

Go into the park itself by jumping over the hedge or going through the main gates. If you switch to SOV and go to the bandstand in the middle of the park, around it you will find eight pink scents. Collect them all, and you will be doing the pursuit challenge with the local Whippet. Catch him, and when you are controlling him, go to the first kitten wandering around the corner of the road that doesn't lead anywhere. Pick him (or her) up, and take it back inside the apartment. Take it into the lounge and place it there. The next kitten should be wandering around the pavement across the road, so pick it up and put it in the lounge. There's another kitten heading to the right when you go out the front door, and the other two are easy to find wandering about the pavement. Once you have the fifth one, the chances are there are going to be one or two which have gone out the front door, so just pick them up and place them in the hallway. The lady will give you a bone and tell you that Miss Peaches is making a new cat food.

You can easily find him wandering around the park, and he's definitely one of the tougher dogs. Have more than 60 bones at the ready, beat him in a pursuit or digging challenge, and then he can help you to sort out some runaway kittens who need to be fed. He also can teach you a very weird Doggy Do move. 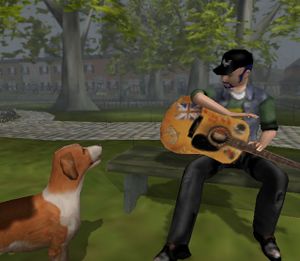 The guitarist needs you to help him find his sheet music.

If you go into the park, you will see a man sitting on a bench with a guitar. It's not the same person you met in the Farmhouse level, and his problem is that he has lost his sheets of music. He says that the wind blew them away, but there is a footprint trail leading to each of them. The first piece is in a circular flowerbed surrounding a statue. Take it back to him and find the next one in one of the gardens of the houses. Use SOV to find it and take it back. One of the pieces is on top of a hedge, and the other two are lying around on the grass in the park. Once you've brought them all back, the man will give you a bone and you get to hear his music. He says he's going to write a song about Jake called "The Awesomely Wicked Dog".

There are two bones in the park. One is just lying on the grass, and the other is buried. Use SOV to find them. There is also a bone inside a bin just down the road from the gate to the Dog Pound. 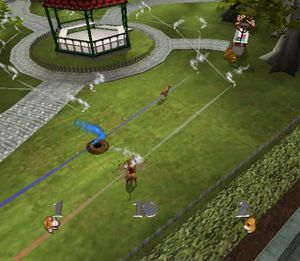 Try and dig your holes faster than the Whippet.

You can find eight blue scents lying around the park. Get them all, and in the last digging challenge you need to dig 10 holes faster than the Whippet.

Four red scents are around and in the bandstand. Get them to do the Doggy Do challenge.

You have now learned all the Doggy Do moves! Go try it out on the guitar player.

The last bone is for the purple scents. They are mainly in the road, in the park, and there are a couple on each bench. The last one is along a wall opposite the gate to the Dog Pound. When you've gotten them all, a bone will appear in the dog bowl.

You might get chased by the Doberman, but there is a way of avoiding this by using the Whippet. Take control of him and push the Doberman through the gate to the Dog Pound and to the right, so his nose is sticking through the bars. When in control of Jake again, just go to the gate and The Dog Catcher will not be able to chase you, because he will be stuck! If you don't want to do all that, just RUN!

Go into the kennel to save the game, then turn to the right (camera view, so Jake's left) and you will arrive at the Boom City Centre.