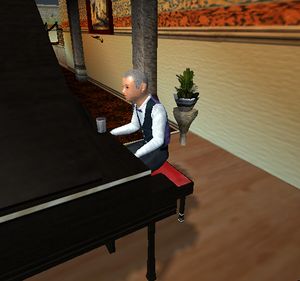 The man who has lost his wigs needs your help.

Switch to SOV when you get to this level, because there are a few purple scents dotted around the road. Then go through the main doors of the hotel, and you will see a rainbow coloured wig on the floor. Leave it for now, go to the other end of the room and talk to the pianist. He will tell you that tonight he is doing his "fabulous" act, and he wants you to get his wigs for him. Go back and get that wig lying on the floor and bring it back to him. Then go back out of the hotel and turn right towards the car park. Next to a lamppost you'll find a Mohican wig. Pick it up and take it back to the man. The third wig is sort of an Elvis wig. To find it, go out of the hotel, turn left and it's in the corner of the other car park. Take it back, and the man will tell you that there's one more to get. It's on the other side of the road which leads to the church-like building. Take the girl wig back to the man and he'll give you a bone. The other people in the hotel will throw tomatoes at him. 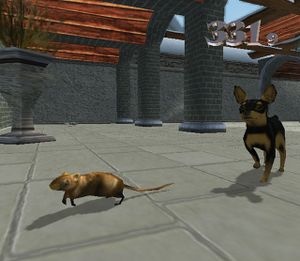 Catch the rats with the Mini-Pinscher.

To the left of the hotel (if you are facing away from it) there is a room at the other side of the car park. If you go inside, a man will come over and tell you that you can't come through until you find his dog. That's the local dog, who he is talking about. If you go to the other side of the hotel, you will find a slope and at the top is an area overlooking the hotel. If you go into SOV, there are also some yellow and pink scents here. Get all eight pink scents and you'll be doing the pursuit challenge with Pixie Frou-Frou, the Miniature Pinscher. Catch her then go back into the room when you have control. 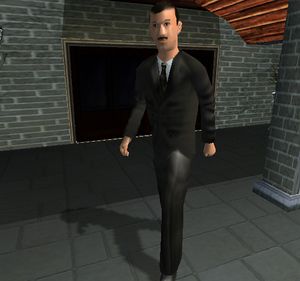 The man will reward you with a bone for getting rid of those rats.

Now the man will ask you to get rid of some rats. Jake will say that there's no way that little dog can stand up to those rats, and all the rats will line up and start doing flips. After they've all run off in different directions, you need to use Pixie to catch them. There are ten rats all together and usually two or three of them will run into the kitchen. You need to pick them up, one at a time, and throw them into the bins at the side of the room. Once you've gotten rid of them all, the man will give Pixie a bone and tell her that she's as good as any Boom City rat-catching dog. Jake remembers that's where the dog-nappers were headed with Daisy.

So what if she's a tiny Miniature Pinscher, her owner wants her to catch ten rats! You can beat her in a peeing challenge or catch her in a pursuit, but Jake's still sure that she won't be able to stand up to those rats. Well, she might do if you're controlling her. All you need to worry about beforehand is that you have more than her 35 bones. 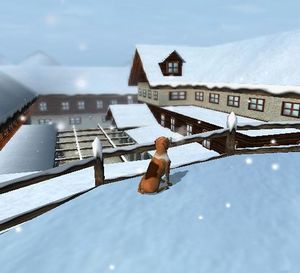 Jake sits on the hill, taking a break.

Now go back up to the hill and find the eight yellow scents. While you're up there, you might as well dig up the bone as well. Now you'll be doing the peeing challenge with Pixie. The grid kind of looks like a long sweet. Just keep covering all the scents as you go along and you should win sometime around when you meet Pixie at the centre of the grid. If you won, a bone will appear in the dog bowl. Go ahead and eat it.

Behind the hotel, you'll find four purple scents and a blue scent. Get the blue scent whilst facing the hill, and the second one will appear not too far away. The third and fourth ones are on the hill, and the fifth one is down the hill on the pavement at the other side. The next couple are on the road, and the last few are along the other side of the hotel. When you've gotten the last one, a bone will appear in the dog bowl.

A bone in a bin[edit]

Go between the hill and the hotel and you will find a bone. After that, go around the building on the other side of the road (the one that looks like a church) and run at the bin. When it falls over, eat the bone inside.

The last bone in this level is, once again, from collecting the purple scents. They are in the road, in the car parks, and around the church building. Two are in the kitchen next to the large room where the rats were running around, one is in the doorway to the hotel, and the rest are scattered around the outside of the hotel. When you have all fifty, a bone will appear in the dog bowl.

Eat any bones left in the dog bowl, and go into the kennel to save the game. Then go back along the road to the High Street level. Keep going along the road, and when you get to the fork in the road turn left to get back to the Café. Go onto the station and go up the stairs to the other platform. Jake will sneak past The Dog Catcher who is reading the newspaper and get on the train. When the train has left, you'll see another cutscene with Wayne and Dwayne, and then you'll arrive at the Station in Boom City.