These are some tips that could help during the game. If what you are looking for isn't here, try looking in the walkthrough for the game. 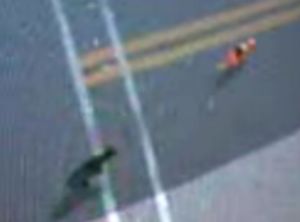 Escape from the Doberman or you'll lose one of your bones!

If The Dog Catcher's Doberman catches you, Jake will say that he bribed The Dog Catcher's dog with a bone to let him free. You will lose the bone, but it will be buried underground somewhere in the level, so you can get it back.

If you have trouble remembering these places, try not to get caught by The Dog Catcher! 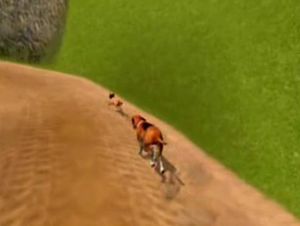 Catch the animals and they'll drop a treat!

If you can find a skunk, a chicken or a cat, try to catch it and it will drop a treat. If you have the skunk though, when you drop it make sure it isn't near you, or it will use its spray and Jake will lose some health. If you press

while holding an animal, Jake will shake all the fur (or feathers) off it and it will be almost naked apart from its head and feet.

Washing in the lake[edit]

Where there is a bed of water (Farmhouse/Watermill/Chicken Farm) jump in, and when you get out, do the shake move (

). Jake is now cleaner. Do this three times or so until you can see Jake's white fur.

When you use the cheat code provided to change Jake's correct bone status (you can have up to 999 bones, and even after that you can collect more bones during gameplay), select a level to go to or switch to the local dog.

Problems with the game[edit]

If the game gets stuck, such as if someone is moving their mouth but not talking, the screen goes blank after going to a new level, or Jake jumps and falls continuously, you will have to restart the console. So be sure to save the game often if you don't want to lose too much unsaved data.