Star Wars: Squadrons/Fire in the Heart

The Overseer chases the Starhawk.

The final Imperial mission in the campaign.

Speak to Grey. He will talk about the time when he was a police officer, spending weeks to corner gangs and criminals and fighting through red tape. When questioned about morality, he says that those with power determine what is right. When you fly, you have the power to decide who lives and who dies, and you've earned that power.

Head into the hangar when you're ready.

Terisa will greet you there. She knows Lindon has joined the fray personally, and is leading the remains of Anvil Squadron. She suspects Lindon will want her to do something reckless, but Terisa declines - Titan Squadron must focus on the Starhawk and destroy it. As a commander, her weapon is not a fighter, but a squadron. If you find Lindon in your gunsights, don't hesitate to shoot him down.

This is it, Titan Squadron. Our moment of victory is at hand. The Temperance has broken off from the rebel fleet, but no matter. Our focus is the Starhawk. And thanks to the reinforcements from Admiral Sloane, we now have it surrounded. The Starhawk suffered catastrophic damage from our baradium assault, and has had no opportunity for repairs. If I'm correct, a careful strike to the ship's tractor beam core should turn it into a floating time bomb. Reaching the Starhawk will not be easy. The rebels managed to call in reinforcements of their own - Anvil Squadron, to be precise. Lindon Javes is handling Anvil Squadron's tactica personally. Anvil took heavy losses at Mon Cala, but they still have starfighters - and a grudge. Destroy them. They're also fielding a Nebulon-B frigate. We have a raider on hand to assist you. Once you reach the Starhawk, you must breach its armor to attack the core. Scans indicate there's an undetonated baradium missile, lodged somewhere in the Starhawk's hull. Exploit that. With the hull breached, a single fighter can fly inside the Starhawk to attack its tractor beam core. We have no idea what to expect on the inside. Do what you must to start a core overload, and then escape to the Overseer while there's still time. All our work and sacrifice has led to this, Titan. Do not let Lindon Javes stop you now.

Speak to Sol. She will emphasize the political power and esteem that comes from being an Imperial hero, and looks forward to a future for the Empire beyond Death Stars. Meanwhile, LT-514 will be grateful to have been able to observe your performance in the field, and Kerrill will be glad to have you on Titan Squadron.

Before launching, set up all three ships to perform the way you'd want them to. The Overseer's hangar will be available to you and you can repair, resupply, and switch ships from it. You cannot, however, change the preset loadouts of each ship.

Terisa will order the Raider captain to follow and aid Titan Squadron and punch through the Republic fleet. Anvil squadron arrives and taunts you as you are jumped by several X-wings with U-wing support. Splash the U-wings quickly before working on the fighters. Around this time, A-wings will also join the fight, supporting the X-wings. The mission proceeds once you've splashed all enemy fighters. 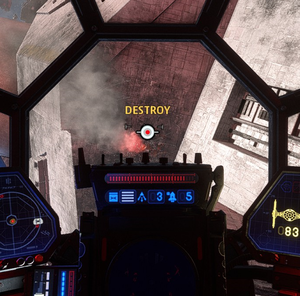 Your ticket into the Starhawk.

Your next task will be to focus on Anvil Squadron's Nebulon-B frigate. If you are flying a TIE fighter or Interceptor, go for its guns to make subsequent runs easier. If you have proton torpedoes, now's the time to use them. Don't forget that the Overseer's hangar is there if you want to resupply, or switch craft (you won't, however, be able to change your loadout).

After sinking the corvette, Anvil will taunt you and Grey will respond in kind. Additional Republic reinforcements arrive in the form of two CR90 corvettes and another Nebulon-B frigate. Focus the corvettes first with whatever you have. Don't forget to signal Titan to attack on their own using

Against the Current
Acquired the Thread the Needle Medal (reached Starhawk core in 40 seconds with no damage).

With all the capital ships down, you're clear to approach the Starhawk directly. Be careful, as its turrets are still active. Fly just ahead of the Starhawk and loop around to acquire the unexploded torpedo as your target. Destroy it and there will be a gap just large enough for you to get inside. The Starhawk itself is stationary, so you don't have to worry about movement. If you get disoriented, simply cut your throttle entirely and find your path. 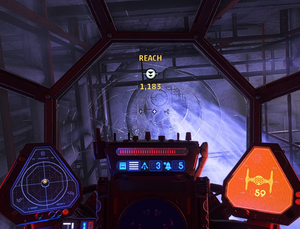 The interior of the Starhawk.

The tractor beam tunnel has a giant beam of energy in the middle. Aside from blowing you backwards like a gentle breeze, the beam cannot harm you. Fly into it and creep forward, taking careful steps to not hit the surrounding pipes.

The tractor beam core consists of a central pillar surrounded by eight emitters on the outer wall. Keep your sights aimed at the walls and slowly orbit the core, taking out the emitters as you go. Avoid going too close to the center and you will be fine. If you miss a core, simply wait for it to come around again.

Upon destroying the final emitter, the gravity effects will cease, letting you navigate around the core freely. However, the core is about to explode. Fly right up to the indicated point on your hull, and your fighter will align with the center. When Captain Kerrill warns you to brace yourself, the core explodes, sending you hurtling through the rings at incredible speed. Ignore the rings and simply keep your crosshair centered where it was, making only minute adjustments to keep yourself on course. 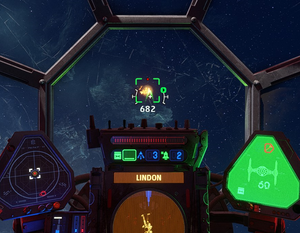 After passing about four or five rings, you'll be shot out of the Starhawk's bow and to freedom, but the mission isn't over.

Your final mission objective is to shoot down Lindon Javes.

Anvil Squadron will fly off to deal with your wingmates, except for a few A-wings. Destroy these quickly and focus on Lindon. Avoid using your missiles during this part of the encounter, as Lindon liberally uses chaff to counter them, and you'll have no way of asking for a resupply. Instead, redirect power to weapons during his head-on attacks, and burn down his frontal shields.

Eventually you'll have to chase him around the Starhawk as he self-repairs his X-wing. LT-514 will comment that his shields are down, and Lindon will reflect on how similar this is to his first TIE. Begin using the missiles at this point, as he can no longer counter them.

Shoot down Lindon Javes to complete the mission.

Titan Squadron - with Admiral Sloane's unerring support, we have left Project Starhawk in ruins. Vanguard Squadron is doomed. Imperial ideals have prevailed. Loyalty. Duty. Discipline. And with our latest champion, we shall ascend to even greater heights. Titan 3 has been promoted to Flight Baron. With full honors. Well done. Your future with the Empire is bright. I take pride that the death of Lindon Javes sends a message to all who would betray us - that wherever the enemies of the Empire may arise, Titan will be waiting. No matter the cost. This war is our crucible. We will emerge triumphant...and bring this "New Republic" to its knees.