The Overseer barely hanging on.

Having narrowly escaped the Starhawk, the Overseer arrives heavily damaged in the Remitik System, with an Imperial supply depot managed by Colonel Gralm. Gralm refuses to aid Terisa, and orders her to deal with his current rebel problem. Terisa resolves to fight the rebels attacking the supply depot, and steal the supplies she needs in the crossfire. Terisa swears vengeance on Vanguard Squadron, and on Lindon.

Talk to Sol. She expresses surprise at the power of the Starhawk, and agrees with Terisa's frustration at being denied munitions to counterattack. Head into the briefing room when you're ready.

Local rebel forces are preparing to attack Colonel Gralm's munitions depot. You will patrol the area in preparation for the attack, and keep the depot safe. Gralm is a fool, but his assets belong to the Empire. Therefore, they belong to us. During your patrol, Titan 3 will secretly search the station, its freighters, and cargo shuttles for baradium. This explosive material will be a valuable tool against the Starhawk. Tag the baradium, and LT-514 will retrieve it remotely. While Gralm is kept busy by the rebel attack, escort the baradium to the Overseer for safekeeping. According to the colonel, these three towers hold large munitions stockpiles and will be the rebels' priority targets. It's a powder keg. If we lose the towers, we lose the depot, and the Overseer will be defenceless. Secure the baradium, halt the rebel assault, and then we can leave the Remitik System. You're on your own, Titan Squadron. Let's do this right.

LT-514 apologizes to you and Titan Squadron for assuming he had the situation under control, admitting that he has much to learn about war. He agrees that Colonel Gralm is incorrect and that Admiral Sloane's orders supersede Gralm's, yet stealing from him seems drastic. Terisa will continue to express her frustrations with Gralm - he is an obstacle, but not an enemy.

In the hangar, Shen will talk about how this routine feels familiar to him. The next steps are the same to him after being shot down - heal up, and then seek vengeance. Vonreg also expresses hatred for Gralm, and blames bantha-brained bureaucrats for her brothers' deaths as much as the rebels who fired the torpedoes. 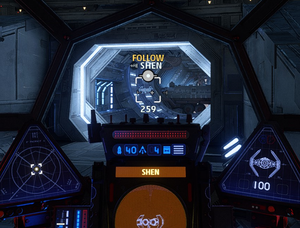 Start by tailing Shen and touring the station. You'll see the three towers you'll need to defend. For the medal, all three must survive.

After your first pass of the station, you'll receive orders to break from Shen and search for the baradium. Fly towards the BFF-1 bulk freighters in the middle and scan them. Baradium won't be present, but other munitions will be. Shen will have an idea, so follow him again.

Shen will fly into a tunnel on the station which will eventually lead to two Zeta-class shuttles. Scanning these will yield the baradium Kerrill was looking for. LT-514 will trace its signature across the rest of the station. Fly back to the nav point and regroup with Titan Squadron.

Four X-wings and four Y-wings will appear on the side of the station opposite the Overseer. Fly out and catch them before they can attack the towers. Another wave of bombers appears as well - catch these quickly. When you destroy the bombers, the X-wings will bug out. 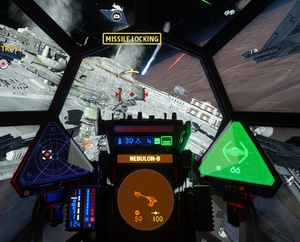 There is a faint blue outline around the frigate's turrets.

A corvette will appear to make another attack on the station. Onslaught rockets will help a lot against the corvette, and instruct your squadron to focus their fire on it. It will be escorted by a pair of bombers, and three more will make their attack runs on the second tower. The bombers fly in a tight formation, allowing for easy rocket attacks. Splash the bombers and sink the corvette and the X-wings will bug out again.

Another rebel force will arrive, this time consisting of A-wings. Instruct your team to protect one shuttle while you focus on the other. Splash the A-wings. After three waves of A-wings, the shuttles will make it to the Overseer.

Your final target will be a Nebulon-B frigate. Shen will lead the target with ion bombs, letting you target the frigate's gun turrets. You don't need to destroy all of them, but destroying about three quarters of the turrets on the frigate earns you the Toothless medal. With all its turrets disabled, the frigate is not a threat and can be destroyed at your leisure.

Gralm will order Titan to land at the station for debriefing, but Kerrill countermands him. Return to the Overseer to complete the mission.