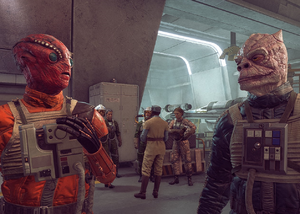 Frisk and Gunny discuss what it means to be a Republic.

First, speak to Frisk and Gunny. Frisk will suggest that instead of destroying the listening post, that they should have commandeered it and used it to trick the Imperials out of intel and cash. Gunny will pretend she didn't hear anything, though she admits that Frisk is right about war not being cheap. Frisk will bemoan their changing to "a legit Republic" since they must behave less like rebels.

Following this conversation, head straight into the briefing room.

First, congratulations. Because you captured the Star Destroyer Victorum, our Starhawk prototype has been completed ahead of schedule. But the Empire doesn't know that - they believe it's still under construction. Terisa Kerrill will keep hunting Project Starhawk until it's destroyed. We've been assigned to stop her. So. Using that decoy message I sent, we're going to set up an ambush. The false intel stated you're protecting a shipment of magnite crystals, essential to completing the Starhawk. With this bait, we'll draw Terisa and the Overseer deep into the Zavian Abyss - a highly volatile area of space. Here is where we set our trap. Don't worry about the convoy - it's empty and droid-piloted. However, that does mean you'll need to clear any obstructions from its path. Vanguard, I want you to defend that convoy with everything you've got. We need to make this look good. Your destination is this bottleneck. There, the Starhawk will be waiting to disable the Overseer...and hopefully, capture Terisa. It might sound simple, but nothing is simple in the Zavian Abyss. Brace yourselves.

Speak to Ardo and he'll talk about Lindon and patience, waiting for the right information and stringing Imperials along into a trap. Lindon, meanwhile, will be speaking to General Syndulla, thanking her for her support.

In the hangar, Frisk will express excitement at bait-and-switching with Terisa, and watching the Starhawk show off its abilities. Grace will comment on the Starhawk's primary weapon - a powerful tractor beam ten times stronger than a Star Destroyer.

For this mission, you have multiple options: an X-wing, Y-wing, or A-wing, each with different loadout options. While you will be engaging enemy starfighters the most, choose the ship you are the most comfortable with. Don't underestimate the Y-wing's rapid fire cannons, or the multi-lock missiles against enemy fighters. 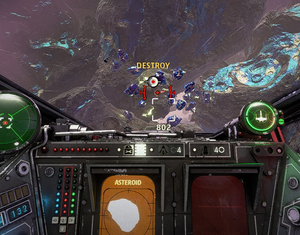 Follow the convoy as it makes its way through the abyss. The lightning won't damage you, but the rocks and the surrounding clouds will. Stay away from the edges.

Eventually your first target will appear on radar - an asteroid obstructing the path. Fly up to and destroy it.

On the other side, you'll see the remains of a Venator class Star Destroyer from the clone wars - and along with them, a dozen TIE fighters and interceptors. Destroy these fighters. As you're fighting them, a number of bombers will appear for a run on the convoy. Prioritize these to protect the convoy, then mop up the remaining fighters.

Fly to the waypoint to continue the mission. 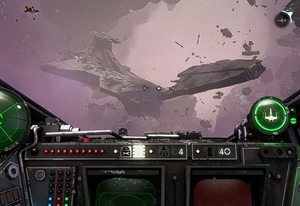 Passing the remains of a Venator.

The Overseer will appear, and commence its attack on the convoy. This is the best time at which to intercept missiles from the Overseer - stay close to the convoy and catch the missiles as they fly past you. You'll also need to destroy another asteroid to let the convoy through. 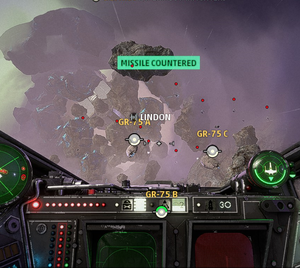 The Overseer's TIEs swarm the convoy.

Once the convoy passes the remains of the asteroid you blasted, Terisa will taunt you and scramble a mix of fighters and bombers to catch the convoy. The convoy can easily outrun the Star Destroyer - don't worry about it. Let Terisa's flight leave the safety of the Overseer before targeting the bombers.

Safety in the Storm
Protected the entire convoy in the Zavian Abyss.

The Starhawk will be nearby, but needs time to charge its tractor beam before making its appearance. The Overseer will abandon bomber strikes in favour of overwhelming numbers of TIEs. Dogfight your heart out and shoot down as many as possible as the Starhawk's tractor beam charges.

Once the Starhawk's tractor beam is fully charged, the Starhawk blasts through the asteroids it was hiding behind and jumps the Overseer. Head for the waypoint to complete the mission.

[Go to top]← Signal to Noise | Into the Abyss | Fractured Alliance →