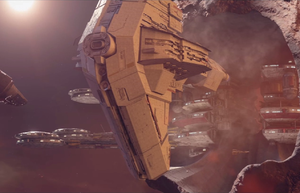 The Starhawk under construction.

Your perspective will now switch back to the New Republic. Interact with the R2 unit again if you want and have it spin around. When ready, talk to Frisk.

Frisk will say he's been looking for you and express concern over Lindon and Ardo. Word of the convoy at Desevro has made it to the Nadiri Dockyards, but Frisk suspects something else is happening with Lindon to keep him so quiet. Head into the briefing room.

In the briefing room, Ardo confirms Lindon's fears: that Terisa is searching for Project Starhawk. Lindon, however, is one step ahead, and intends to bait Terisa into a trap.

An old protege of mine, Terisa Kerrill, is leading the Empire's search for Project Starhawk. She won't stop until it's destroyed. So, I've initiated a plan. I sent a message we know was intercepted by an Imperial listening post hidden near Esseles.

What was the message?

Bait for Terisa. And now that the Imperial post has served its purpose, we're ready for part two. If we destroy that listening post, Terisa will think we have something to hide, and follow that message to the letter. Vanguard, I want you to take Y-wings with heavy ordnance to that post in Esseles, and bomb it to oblivion. A corvette will join you to draw Imperial fire. Gunny will support and resupply our bombers. These are your targets. We've identified the receivers along the hull as weaker areas. Destroy them all. Additionally, destroy the thermal regulation systems along the exterior trench, and any dishes atop the listening post. If you pull this off, we'll rob the Empire of a valuable asset. And then Terisa will fall right into our trap.

After the briefing, speak to Grace and she will applaud the plan's cleverness, noting similarities to an Imperial operation. Lindon will talk about how Terisa went from a street orphan to captaining her own Star Destroyer, and that is why she is fanatically loyal to the Empire. In the hangar, Keo will note that the fight has become personal.

For this mission it is strongly advised to replace the default lasers with the rotary cannon.

Your first objective will be to use freelook to look around while in hyperspace. Just follow the on-screen instructions to do so. 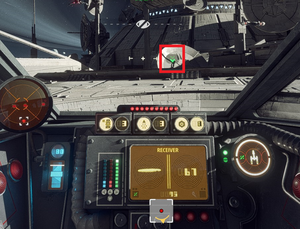 Drop the bombs when the green arrows appear.

Upon arriving at Esseles, follow the corvette as your squadron guesses about the nature of the message. Stay close to the corvette until they give you authorization to attack. Gunny will use Squadron Mask, and Frisk will lead you on a bombing run. The bombs will always drop straight down, and the receivers are an extremely large target. Drop the bombs when you see the green downward facing arrows on your HUD. Two should be enough to destroy the receiver. While bombs are the fastest way to destroy the receivers, Goliath missiles and even guns will work as well.

The Imperials will then start to call for help. Shift power to weapons and destroy the broadcast dishes in the middle of the station. The dishes have extremely little health, and will fall in short order to the Y-wing's rotary cannon. Destroy these before the Imperials call for backup, and while you're at it, work on destroying the station's guns to make safe zones. 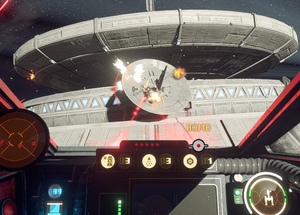 The target dishes are mounted to towers in the middle, but you can destroy these dishes as well.

Once all the receivers are down, regroup with Gunny.

Eventually Keo will mention that the corvette is taking a pounding from enemy fighters. Take a break from bombing and target the fighters chasing the corvette, which are marked as secondary targets. A single Goliath missile will be enough to wipe out the entire attacking squadron. Mop up any survivors with your rotary cannon, which cuts down anything in front of you in short order.

With the corvette secure and the thermal systems down, the core will become exposed.

Fly into the tunnel, ignoring the turrets on the way. In the middle are three core components - blast them either with lasers or bombs. Once all three are down, divert all power to engines and boost your way out of there.

Reach the hyperspace jump to end the mission.