We all choose our path. Light or dark. Freedom or destruction. The Empire chose to destroy Alderaan in order to spread fear, and douse the fires of rebellion. But the heroic pilots of the Rebel Alliance have chosen to keep fighting. It was their bravery that ended Palpatine's reign and brought about our New Republic. However, the Empire lives on, shattered though it may be. As I speak, Imperial forces are edging towards the Bormea Sector, hoping to end our New Republic before we find our footing. As their Empire collapses, they try to tighten their grip. But the galaxy is changing, and you can be a part of it. Make a choice. Fly with the New Republic. Change our galaxy for the better.

As you've no doubt noticed, the Empire is jamming communications across this sector. I fear these blackouts could be a prelude to invasion. Vanguard Squadron, I need you to split up and solve this. Frisk and Grace, bring our new pilot to the Brentaal System. The scouts we sent to investigate haven't reported in. Find out what happened to them, then regroup with your squadron near the planet Cavas. Gunny and Keo, that's where you're headed. If I were still an Imperial...well, I'd send jamming ships there. Knowing the Empire, I expect they're using these jamming vessels to disrupt our long range comms. They'll have TIE squadrons in tow. Destroy all Imperial squadrons and jammers. Communications must be restored. For Project Starhawk's future. When you've succeeded, regroup and return to the Temperance. Let's see how you do, Vanguard Squadron. 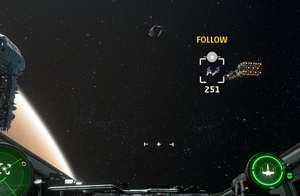 When the mission starts, target Gunny in her U-wing and tail her. As briefed, the squadron will split up to take on the jammers. Gunny in the U-wing and Keo in the A-wing will head off on their own, leaving you with Frisk (Y-wing) and Grace (X-wing). Head for the hyperspace jump point and align yourself with it to jump to the next area. Your engines will be reduced in power until you reach the jump point, so simply fly straight and put all power into engines to reach the jump point quickly.

Coming out of hyperspace, Grace will take the lead. Follow her. She and Frisk will comment on finding no signs of the scouts. Grace eventually finds a sign of them, but is unable to inform the Temperance of their find. Fly straight to the target, to find the blasted remains of an X-wing. As you get close, slow down and park right in front of it. Grace will instruct you to scan the debris. Target it to scan. 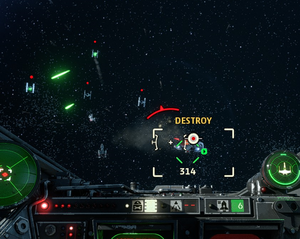 Destroy all four TIEs and their carrier.

After you scanned the debris, Frisk will get a bearing on a second signal. Follow him and he'll lead you right to a Gozanti TIE carrier, which drops off four TIEs. Switch power to weapons when you attack the Gozanti, as it has a fair amount of health compared to its minions. Grace and Frisk will most likely have mopped up most of the fighters by this point, but help them mop up after destroying the Gozanti.

Grace will get the idea to scan the Gozanti's wreckage to determine where the jamming ships are. Approach the Gozanti wreckage and scan it the same way you did with the X-wing wreckage earlier. The coordinates will point towards Cavas - where the rest of your squadron is. Head right for the jump point to assist your squadron. 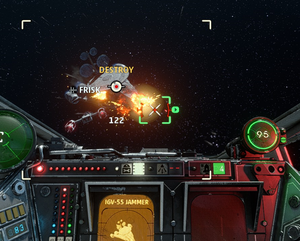 Coming out of hyperspace, you'll encounter two Imperial IGV-55 jamming ships escorted by six TIEs. The TIEs are the softer targets and easy to kill, so target these while Frisk attacks the jammers with his Y-wing. Destroying all TIEs before the jammers earns you the Defense Breaker medal for the mission. These TIEs will start firing missiles at you. Press R,

when the missiles are close to fire countermeasures. If the TIEs are coming at you head on, you can shoot the missiles down yourself with your lasers.

With these jamming ships down, Gunny and Keo call you, requesting your support. Go for the waypoint to assist your team.

Gunny and Keo are jumped by six additional TIEs and a Arquitens cruiser. Start with the TIEs. Splashing the first wave of TIEs creates a second, this wave consisting of four TIEs and a Gozanti. The Gozanti will jump out of the system before you can kill it, so focus instead on its cargo. Splash all four TIEs to continue.

You may be wounded by these TIE engagements. The game will now instruct you to press and hold

, or 6 to request a resupply from Gunny. This will prove to be invaluable in future battles, especially when you are in a TIE Fighter.

Together, Vanguard
Destroy the cruiser at Cavas without backup.

The final battle group consists of an Arquitens cruiser, two jammers, and a wing of TIEs. At this point you must make a decision: if you want the achievement, you must destroy the cruiser while leaving the jammers alive. If you want the Loyal Recruit medal, you must destroy the jammers first. You won't be able to get both. Both methods should involve removing the number of guns firing at you, and that first means splashing the defending TIEs, so start with them. 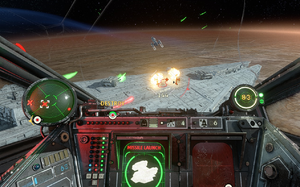 If you're going for the cruiser first, take advantage of its more vulnerable rear and slide in behind it. Slip past its shields and destroy some of its turrets before flying away to let your shields and lasers recharge. Try not to drift in front of the cruiser, as it has too many guns up there. Once the rear guns have been destroyed, you can start destroying the other guns on the dorsal side. Also prioritize the cruiser's missile launcher located amidships.

Once these guns and missiles have been neutralized, the cruiser gains a massive blind spot directly above it. It still has ventral turrets, so don't go below it. Now the only threats are the jamming ships' guns, which aren't as powerful or numerous. It will likely still necessitate several passes to destroy the cruiser, but with its newfound blind spot, it won't last long - especially if you slip past its shields before unloading into it. Gunny will be both impressed by your skill, and annoyed at your inability to follow orders.

If you intend to follow Gunny's instructions, the two jammers become your second targets after splashing the TIE escorts. Neither jamming ship poses a large threat on its own, but the cruiser has multiple guns and will necessitate several passes in order to destroy them. Upon destroying the jammers, two corvettes arrive and double-team the remaining Arquitens. While the Arquitens' guns are distracted, make gun runs against it and its turrets.

Fly to the last waypoint to complete the mission. Gunny will suggest the cantina, but Javes has a visitor and another mission lined up.

[Go to top]← Prologue: A Call to Rebellion | Form the Vanguard | The Skies of Yavin →