You must breach the Chaos fort through a succession of destructible gates with the Imperial Guard. To advance to the final part, you must also help the Guard out a bit with an Eldar strike force. This mission walkthrough assumes Insane difficulty setting. 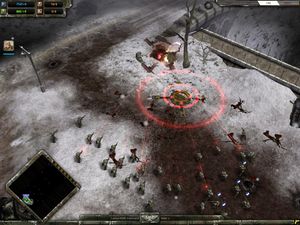 The way to kill the turrets. Same goes for enemy infantry.

You start out with your Command Squad and a hefty bunch of Guardsmen, displaying the "strength in numbers" approach of the Guard right away. For this mission, you will always have an unlimited number of troops - if one formation is destroyed, you will receive a new one for free after a short delay.

You must take two Strategic Points close by, both guarded by a turret. Take these out one at a time by charging with the Command Squad and helping out with a couple of squads while it's drawing all the fire. When you have the SPs, stay put for a while and build your base. Get a Tactical Control and purchase all available upgrades; build Commissars and attach to squads; buy Sergeants and heavy weapons. Don't waste resources on too many Plasma Generators, you don't need much Power and you'll be short on Requisition. 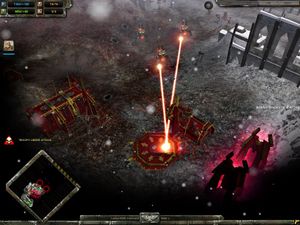 Destroy the two Chaos Temples here and it's downhill from there.

When you have a full Command Squad and some upgraded infantry squads, you can start moving up. It's probably easier to take one side at a time - you can focus your troops and attention better (the other side will be left alone by Chaos). Left side will get you a Mechanized Command with a Sentinel Depot and right side will get you a Hellhound Depot. Either will do; you'll mostly face infantry, but also some Defilers. Take one side and build Listening Posts and an Infantry Command there. 1-2 Raptor Squads will keep jumping over the wall from the central Chaos base, so you need to put something there to handle them (try a Hellhound).

When you're set and have your 3 vehicles, shoot up the second gate on your chosen side and move up. You'll probably see largish hordes of Cultists, some Marines, and a Defiler. There are three "hills" with a Chaos Temple on each, but these seem to push out basic Cultist Squads so they're not too dangerous - you may want to take down the central base first, since it's sending all those annoying Raptors. The enemy has no anti-vehicle capacity to speak of, so lead with vehicles and follow with Guardsmen who stay away and make use of their good range. Capture SPs when you pass them and build LPs on them right away, this will keep single Cultist Squads busy while you destroy the Raptor base.

When the central base is gone, sweep those "hills" and destroy the Chaos Temples. You can build a secondary base over the Chaos base, but it's not really necessary. Take a couple of vehicles and squads back down on the other side to get that second Mechanized Command you skipped before. Reinforce/repair/build and gather your units in the area between the 2nd and 3rd gates.

Before you go through the third pair of gates, bring a Servitor (to repair the turrets) and a couple of squads on the middle hill. Then breach the gates. Let the initial Chaos rush melt on your newly claimed turrets, and have your main forces start pushing the attack (Hellhounds in front, Guardsmen behind). Then move in and destroy the few production buildings they have. The defense here is very weak. Sweep the area and position you army to batter the final gate. It is indestructable, but you'll be switched to Eldar to attack from behind. 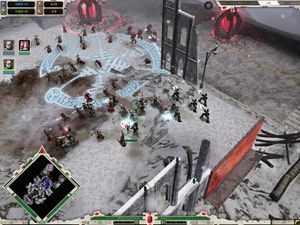 Farseer special abilites have no friendly fire, you can throw one right in the middle of a fight.

This part is very simple; you can do it without losing an elf. Select your Webway Gate and summon some troops. Attach the Farseer to a Seer Council. Set the Seer Councils to "hold ground" and the Dark Reapers to "stand ground". Go into the Webway Gate and pop out from another. Bring the Seer Councils out first, melee the enemy, then get the Reapers out to shoot at them. Use the Farseer's special abilities. Try to fight around the Webway Gates if you can (they are constantly healing your units). Smash the generators. Heal (and wait for special abilities to charge if you need them). Move on.

When all the generators are down, you must kill a Chaos Sorcerer. This is also simple, but you should disregard the instruction to defeat the sorcerer in one-on-one combat. Heal/recharge, take your troops out through the final Webway Gate. Kill any infantry that attacks you but ignore other enemies (infantry further away and especially the Defilers, as they cannot be harmed). Then move down and rush the enemy commander.

The single Sorcerer seems trivial for your three commander units, but turns out he's a special guy with 15,000 health, so you need to beat at him for quite a while. You don't have much tactical choices to make - rush him with Seer Councils, use all special abilities, shoot with the Dark Reapers. He'll die eventually, and you'll switch back to Imperial Guard. 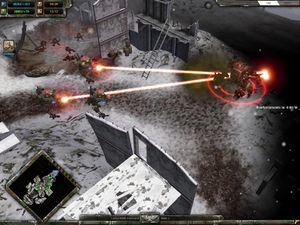 When you regain control, check if you need to repair vehicles or reinforce squads that have taken damage while you were playing Eldar. Then move up.

The final part is trivial. You can ignore the turrets, they still won't do anything. Take Hellhounds in first to sweep any infantry skulking around. After that's done (or while they're doing it) you run up with your Sentinels to kill the Defilers. Mission complete.