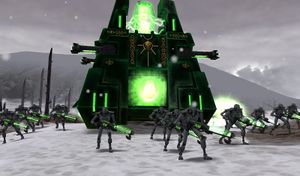 Necrons are the undead of the Warhammer 40,000 universe. Ages ago they were the Necrontyr, a technologically hyper-advanced yet short-lived species obsessed with immortality. They ended up striking a deal with what they called C'tan or "star gods", powerful beings feeding on stars who started preferring organic life after coming in contact with the mortal Necrontyr. In exchange for servitude, the C'tan transferred Necrontyr souls into immortal, regenerating metallic bodies. Unfortunately, millions of years and being killed/resurrected repeatedly have dulled their minds, making Necrons into something like robotic zombies. They serve the two remaining C'tan - Nightbringer and Deceiver (the rest killed each other after running out of victims) - without question, hunting life for them to feed on.

The Necrons disappeared around 60,000,000 years ago, apparently withdrawing to tomb worlds in lack of sufficient life to harvest. Thus only Eldar have knowledge of them, younger species remaining quite ignorant. They have recently begun to stir, appearing in small numbers here and there.

The Necrons, like the Imperial Guard in Dawn of War, do not appear as a complete faction in Winter Assault. They are only seen in the final mission, and they only have two kinds of units. They are, however, playable as a full faction in the Dark Crusade expansion.

Warriors are the basic Necron infantry. They move slowly, but are more accurate when firing on the move than other infantry. They are effective against both infantry and vehicles, and both in ranged and melee. They regenerate and may get up after being killed. They may seem intimidating, but they'll go down under fire, just not as quickly as other races. Use your superior range and mobility as well as special abilities (e.g., grenades) to gain an edge.

The Monolith is a mobile HQ building with lots of weapons. It moves slowly but does a lot of damage (and especially disruption) from very long range and keeps producing more Warriors for you to chew on. A tough unit, but the solution is handed to you on a plate - Titan weapons. And that's that. Unless for Orks; then you just have to hit them with everything you got.