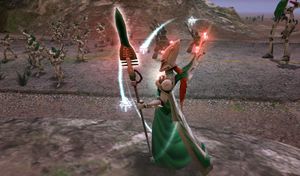 The Eldar are an ancient and technologically superior humanoid species. For millions of years, their nation was unchallenged in power, doing whatever it pleased and mostly ignoring other spacefacing races, who posed no realistic threat to them. Eventually, having nothing else to do but indulge in personal interests and pleasures, most of the culture degraded into a permanent hedonistic feast. In the end this nature combined with their strong connection to the Warp led to the birth of Slaanesh (the youngest Chaos God); in the process, most Eldar were killed instantly and the core area inhabited by their civilization was transformed into the Eye of Terror, an area where the Materium and Warp (Immaterium) overlap and Chaos reigns. Only small amounts of Eldar survived, forever hunted by Slaanesh. These dying-out remnants now either reside on giant spaceship-worlds known as Craftworlds or follow a naturalistic lifestyle on remote, rural worlds.

Eldar are more "advanced" than humans as a species, possessing superhuman agility, speed (humans live in slow-motion to them) and psychic powers. Their army is composed of elite specialist units that tend to do one thing very well and be worthless in other situations. They clearly favor ranged combat and most units are quite weak in melee. The Eldar motto is mobility – they have infantry that can teleport through gates or personal teleporters, several jump-capable vehicles, and even teleporting buildings. 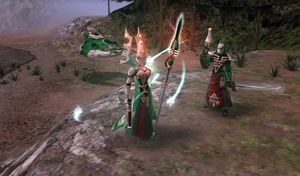 Farseer and a Warlock.

The Farseer is the Eldar primary commander unit. She's a melee fighter with less health than other commanders but more special abilities. Focusing your attacks on her right away (before she can use too much of her abilities) would be smart. She'll die relatively easy because of her low health.

The Eldar secondary commander unit is actually a squad of Guardian squad leaders, Warlocks. It's a pretty tough bunch as there are so many and they have commander-class armor and health. They also have some special abilities, though nothing as potent as the Farseer. First and foremost they are the best Eldar melee infantry. You have to kill these before they get to your infantry, or you'll regret it.

The Eldar builder unit's noteworthy feature is his/her ability to teleport. This gives access to fast SP fortification with Listening Shrines as well as Webway Gates and secondary bases behind enemy lines.

Guardians are the basic Eldar infantry unit. They are reserve troops, people who used to be aspect warriors before but moved on to another occupation. They are perhaps most alike Guardsmen; rather numerous, moderately effective at range and very weak at melee. Any squad with heavy weapons or melee ability will beat them, really. Their squad leader unit, Warlock, provides bonuses, has special abilities, and can detect infiltrated units.

Rangers are similar to Scout Marines, only better; there's up to 8 men in a squad and they all have long rifles. They have very long range and cause extreme morale damage. Assault Marines are a very good response to these.

Banshees are essentially crazy Eldar women who scream and hit you with power weapons. They are fast-moving melee specialists who beat most infantry units but can't really hurt vehicles. Try to dance if you don't have any melee infantry close by; if you tie them with Assault Marines, you should support with ranged units to avoid casualties.

Ranged specialists whose range and damage are something like a heavy bolter squad's. Ineffective against vehicles. Focusing fire on them or sending Assault Marines over is probably a good idea.

The Eldar version of jump infantry doesn't use jetpacks but personal teleporters instead. Warp Spiders are considered somewhat reckless, as the teleportation process is apparently rather dangerous (the risk doesn't seem to be implemented in Dawn of War, however). The Space Marine equivalent for these would be something like an Assault Squad with plasma guns. Flamers are very effective against Spiders, as they tend to teleport close to your infantry, putting themselves right in the line of fire (heh).

These are some kind of small gun drones or mobile turrets that are counted as infantry nevertheless. Thus, you should shoot them with heavy bolters and plasma guns, not missiles and lascannons. Also note that they are produced from Webway Gates, not Support Portals. The shuriken cannon is a potent anti-infantry weapon that you should take out early.

Boy, will you learn to hate these. The platform is the same as before, but it carries a brightlance, a few of which will make swiss cheese of your vehicles and turrets. A group of these appearing at the back of an Eldar infantry rush will have you wondering where did you put your tanks, until you see the not-so-full-anymore Vehicle Cap counter and realize they were killed already. Make these a priority - if a Shuriken Platform kills some infantry units you can usually reinforce, but losing a couple of Predators is painful.

This is basically an armed transport, able to "tank" against an infantry-based force but fried very quickly by proper tanks or anti-vehicle weaponry. Unlike other transports, it can jump like a Land Speeder, which is potentially troublesome.

This is a light raiding vehicle, much like a Land Speeder. The Vyper's weapon can be upgraded to an anti-vehicle missile launcher, though. It is fast and has the jump ability. Easily killed when you have vehicles or missile launchers, but possibly nasty if attacking your poorly-equipped infanty early on (like mission 6).

The Wraithlord is the Eldar walker vehicle, not as robust as a Dreadnought but more so than most Eldar units. It is most effective in close combat, but also has a shoulder-mounted anti-infantry weapon that can be replaced with a brightlance. It's usually best to avoid and hit with missiles/lascannons, unless you have several Dreadnoughts to beat it down quickly. 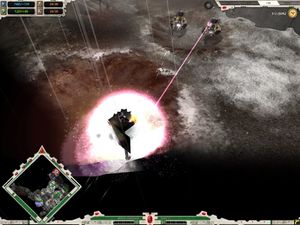 This is evil. Fire Prisms are more durable than other Eldar vehicles (roughly equivalent to Predators) but also fast and capable of jumping. And they have really heavy weapons that do high anti-vehicle damage and blow your infantry all over the place. These are your #1 target for any anti-vehicle weaponry on hand. 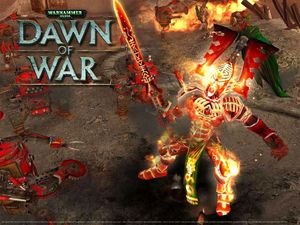 The Avatar of Khaine.

The Avatar of Khaine is the Eldar Relic unit, the ultimate (giant) close-combat fighter. He also boosts their Squad/Vehicle Caps, production times and morale. However, as you only see him in mission 7 where he raids your base, you would be mostly concerned about the close combat part. A Dreadnought to challenge him (or dancing if you don't have one) with concentrated fire from everything else should do the trick. 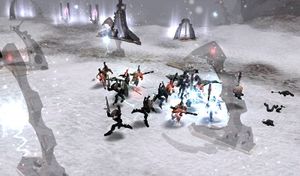 The Eldar signature structure is their Webway Gate. These gates increase their Squad & Vehicle Cap limit and allow infantry to teleport from one gate to any other with a fixed delay. All Eldar buildings can be relocated (a slow teleport ability) around any Webway Gate on the map. The gates can be upgraded with the Shroud special ability which makes them (and other nearby buildings) infiltrated. This means both turrets and buildings that produce/transport enemy troops can be invisible, requiring an infiltration detector unit to locate and destroy.

The Eldar turret comes equipped with an anti-infantry scatter laser weapon and can be upgraded to an anti-vehicle d-cannon. It functions just like Space Marine turrets, except that the Eldar anti-vehicle weapon does not disrupt infantry (and the turret can be cloaked by an adjacent Webway Gate).