Tetorigawa is the location of the Maeda Clan, led by Toshiie, the uncle of Keiji Maeda, and his wife, Matsu. The map is rather large and difficult due to Tosiie and Matsu's tendencies to give chase once all camps are free for the taking, but the main goal is straight-forward and, once accomplished, makes the battle significantly more achievable. 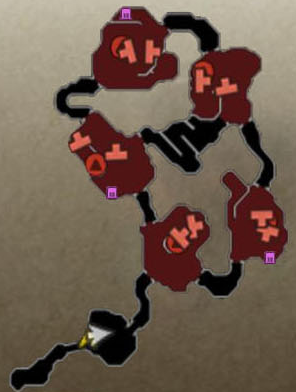 The area's full map, revealed after Toshiie and Matsu retreat.

The stage starts off with an encounter. Toshiie reveals and promptly introduces himself at the gate, cuing the attack. If you think you'll have trouble later on (for reasons such as high difficulty or low level), don't break any of the crates here as they'll prove more useful later on. Once a set amount of his health is gone, Matsu arrives to assist her husband and even the score. Together, they can be quite a threat, but knock a good amount of their health away and they will run off to recharge. On the positive side, the gate opens, revealing their full camp. On the downside, the Maedas have literally replenished their health, and throughout the battle will be able to restore their health whenever they have the time for it.

Here, you have two options: the easy route is to cycle around the map while taking the camps which work to restore their food supply in the first place. Take them all for a Special Reward, but even this may be a bit challenging. The entire army and its two generals will be on the attack as you attempt to focus on claiming the ever-important camps. Run around to distance yourself from the generals before spending too much time dealing massive combos to the Camp Commanders. The second option is to defeat the Maedas without taking the camps, meaning they not only have assistance from their active troops, but also from the camps which restore their health from time to time. This may be too difficult to do alone even on the easiest difficulty unless your general is extremely over-leveled, but it earns you a separate Special Reward.

Toshiie and Matsu aren't playable warlords in the base game, but, like Kenshin Uesugi and Kasuga, that in no way hurts their credibility in regards to the damage they can dish out. Due to their unique fighting styles and inability to grasp their play-styles through trying them out yourself, Toshiie and Matsu provide a new kind of challenge. They tend to use their weapons but otherwise rely heavily on unreadable skills; for example, Toshiie can breathe fire into the air that, if caught, deals consistent damage to your general. Meanwhile, Matsu has the ability to summon animals to come to her aid, so don't be surprised if a bear runs into you out of nowhere. Playing co-op means an easy split between the two, but if you must focus on both, try to take Matsu out first. Her animals can attack from a long range while Toshiie's fiery combos mostly utilize closeness. Take both out to complete the battle. In certain routes, the stage will end with a mischievous wink from a hiding Yoshiaki Mogami, indicating the unraveling of a plot point in which he kidnaps Matsu for the sake of the Eastern Army.