Kawanakajima is the location of many skirmishes between the forces of Kenshin Uesugi and Shingen Takeda. In this snowy tundra of northern Japan, Kenshin has currently settled, and with the aid of Keiji Maeda and Kasuga, holds the large piece of land. Upon entering, Kenshin is nowhere to be seen; take his camps and defeat his trusted generals to earn a battle with the God of War. 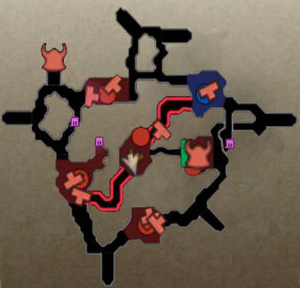 The large map of Kawanakajima after the first camp is taken, revealing a secret path. 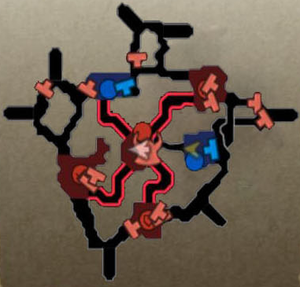 The map after all gates are opened.

Kawanakajima is one of the longer standard stages of the game. As you make your way off the starting point, the map will expand to reveal a labyrinth. Keiji will be waiting for a battle at the first camp, but for the first Special Reward, pass him by and take the next camp. This will open up a gate which leads to the center camp, as can be seen on the map to the left. Defeating Keiji first will instead open up the normal gate by his camp. However, if you skipped Keiji, your first battle should be with Kanetsugu. Despite having a special scene which introduces him upon your approach, Kanetsugu has the appearance of a minimally glorified soldier and acts as the very definition of a joke character. Even on the hardest difficulty, he can be defeated in a couple of hits. Nevertheless, take him down for a new scene: if you haven't defeated Keiji yet, Kasuga will arrive. If you have, Keiji will get a second wind and both he and Kasuga will have to be beaten. 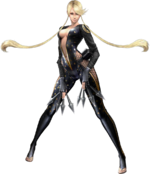 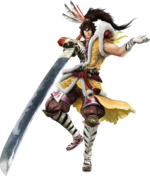 Kasuga isn't particularly strong, but she moves quickly and her wires can prove deadly if you get caught in one of her attacks. On the plus side, her more elaborate attacks (such as building a box of wires as a trap) can be canceled by dodging and attacking her as she's executing it. Keiji, on the other hand, is a bit more trouble to defeat. Taking the camp before focusing on him will prove beneficial, since coming in range of the artillery will only act as an annoyance mid-combo. Make sure you move around often in the space you are given, since the Camp Commander and Keiji will take any chance they get to team up on you. If you've played as Keiji before, you should be familiar with his attacks and know which ones to avoid (i.e., wait for the counter window to elapse for his "Diplomacy of Love" move).

After both Keiji and Kasuga are defeated, Kenshin will finally make an appearance. Take this time before attacking the warlord to clean up the map. Find a horse at the western camp and take it north, where you can use it to get through some breakable gates and open up the crate at the end, containing a hatena box. 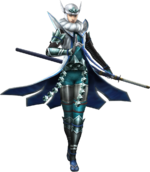 Area warlord Kenshin Uesugi will show up once you've proven your worthiness by taking his camps and defeating his generals. Kenshin is quick and powerful, and like Hirotsuna and Tsuruhime, is able to manipulate ice and incorporate them in his attacks. His speed, however, is his most dangerous trait; one of his skills allows him to perform a dozen slashes in only a few seconds. Though taking all camps will bring an influx of squads, track them down before they can disrupt your battle with Kenshin. Focus on him unless you need health or BASARA, in which case the map is big enough that finding a necessary crate shouldn't be very difficult.