Kanegasaki Nightmare is a battle that takes place during the night, making the entire map appear dark. The area is run by Oichi, who leads an army made up of soldiers that once followed the influential "Demon King", Nobunaga Oda. As the sister of Nobunaga and the only living member of the Oda family, Oichi has a big name to live up to, though she is currently in a state of deep depression and insanity. Her soldiers are loyal, but retain the malicious intent left behind by their previous commander, making them a dark force in Japan that must be dealt with. 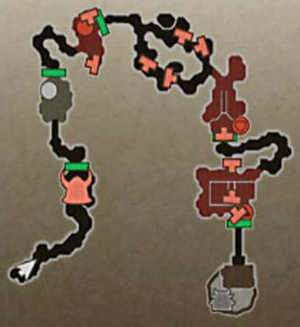 Take control of the camps to light torches and weaken Oichi.

You will encounter Oichi only a short distance from the start of the map. There are also a number of hostages here, who can be freed by destroying their makeshift prison. The first bonus objective here is to find and free all hostages, whose locations will be detailed throughout this walkthrough. The second is to defeat Oichi without taking any camps. With the ability of enemy soldiers to summon reinforcements from their own camps aside, this objective seems easy enough. However, it should only be attempted if your general is at a high enough level, as each camp taken will light torches that weaken the mentally unstable Oichi, who is sensitive to light. Taking camps makes lowering Oichi's health considerably easier, so consider the trade-offs before going one way or the other.

Following the first two camps, you will come across a split in the road. On each path, find the catapult that will take you to a raised secret area (the fugitive may also appear here). You should find some crates and a prison, where you can free the hostages before doing the same on the opposite path. At the end of these long roads is the stairs leading to the next camp; to the side of these stairs is another set of hostages to free. Finally, at the last camp, there is a prison to the right which you should see on your way to the camp. Destroy it and, if you have freed all previous hostages, you will obtain a Special Reward. Defeat Oichi to open the gate to the final battle with her. If you haven't taken this camp or any previous camps, you will obtain a Special Reward. 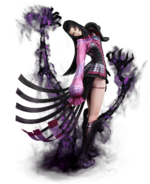 The sun seems to be rising, but Oichi isn't ready to surrender just yet. On the right difficulty, she is a challenging opponent, especially due to her new weapon. Oichi seems to have fallen to the darkness, and has a powerful means of offense to show it: her Dark Hands. These shadowy hands can extend, multiply, and even create pits of darkness. If you don't keep your distance or your guard, they can easily drag you in to a damaging series of attacks.

If you know her attack pattern, Oichi's attacks can be a bit easier to dodge. Her hands tend to reach out for an easy hit but can also extend to grab your general. Despite the threat these attacks pose, Oichi suffers from a great lack of speed. Her movements appear to be lazy and lethargic, giving you enough of an opening to launch your own combos. While keeping a distance may not be the best approach here due to her range, moving in to chain quick combos may be what can knock Oichi off her feet.

When playing as Ieyasu Tokugawa or Mitsunari Ishida, they will be able to bring Oichi in as an ally to their army. When playing as Tsuruhime, Oichi will mistake her for Ranmaru, the now-dead page of her brother, due to their similar weapons.