This is a battle fought in the familiar territory of Kanegasaki. If you have been following the path to Honno-ji, you should see it come up as an option next to Sekigahara. To unlock the path leading to this battle, you must first complete Oichi's green route by going through the Siege of Karasu Castle and defeating Tenkai, unlocking the Incident at Honno-ji. The gray route will then open up for all other generals; follow it to this stage before traveling to Honno-ji. 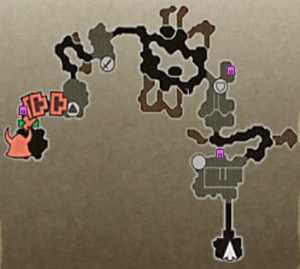 A reverse of Kanegasaki Nightmare.

The map starts off at the opposite end of Kanegasaki Nightmare, where the boss would have been. Oichi is now behind a gate at the other end of the map, with a number of neutral camps between you and her. A group of Occupational Chiefs and Squad Leaders come running from her position, so you have two options here: defeat enemy soldiers as you go and defeat Camp Commanders to take back the camps, or move quickly and take as many camps as you can before the Occupational Chiefs catch up to you. Either method is fine, and both have their trade-offs; the latter is much quicker, but Squad Leaders can easily come up from behind and take the camps back. To prevent this, clear the area of each camp before moving on, halting the advance of any opportunistic Occupational Chiefs.

The first Special Reward requires you to occupy all camps. Neutral camps can be taken with one hit, while the Occupational Chiefs take the other camps on their way toward you. They also have the ability to take back camps you have already taken, requiring you to defeat another Camp Commander. All camps must be in your possession at the same time for the Special Reward. The second Special Reward requires you to defeat 10 Occupational Chiefs. This will come naturally, unless you're rushing through the stage, which of course is not recommended. Whether or not you have taken any or all camps, get through the map's only gate to begin your battle with Oichi.

After defeating Oichi, the true final boss of the map will reveal himself: the warrior monk Tenkai, who is really Mitsuhide Akechi in disguise. Although Mitsuhide was once a vassal of Nobunaga Oda he betrayed him in a move that ended with the death of his former commander. He now seeks to bring Nobunaga back to life, in a ritual that involves the sacrifice of his now-defeated sister, Oichi. Defeat Tenkai and you will now have only one battle left before conquering Japan: the Incident at Honno-ji.