Sekigahara: Assembly is the final stage on Mitsunari Ishida's and Yoshitsugu Otani's red routes. The final boss is Ieyasu Tokugawa, the man who Mitsunari has come to take revenge upon. This stage plays as a reversal of Betrayal, with Mitsunari now attempting to sway an indecisive Hideaki Kobayakawa back to the Western Army. 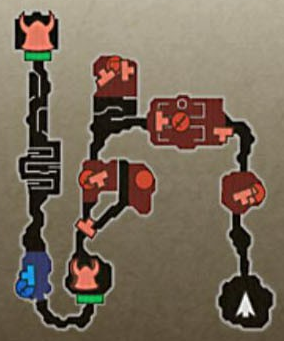 Stop Hideaki from reaching Ieyasu at the end of the map.

The first shortcut at the top of the map, with two fugitive locations.

The second shortcut at the center of the map, with the final fugitive location.

This map isn't easy, and it's made even more difficult if you plan on tackling the Special Reward objectives. For the first, moving very quickly and taking all camps is key. The stage starts off with Mitsunari making the impulsive and unwise decision of threatening Hideaki, pushing him toward the kind and understanding Ieyasu. The first Special Reward requires you to stop Hideaki before he meets up with Ieyasu, solidifying an alliance. To start off, Hideaki is across the map, indicated by the flashing symbol of his army. There are some hidden catapults, as shown in the images to the left, but to make full effect of these, taking camps speedily is crucial. Each camp taken intimidates Hideaki for a short while, making him pause before finally continuing on. If you move quickly enough, the biggest barrier to Hideaki should be the girls guarding the first gate, archer Tsuruhime and gunner Magoichi Saica. Facing two opponents that can shoot you from a distance is no easy task, but your best bet here is to be a bit reckless in order to defeat them quickly. If the time limit doesn't bother you, dodging and parrying are your best bets, and don't forget to use Hero Time whenever available.

If you're able to reach Hideaki in time, you avoid a boss battle between him and Ieyasu as a duo along with obtaining a Special Reward. By this point, Tadakatsu Honda should make an entrance. While it certainly isn't necessary to complete the stage, a successful face-off with Tadakatsu will earn you another Special Reward. If you have not yet defeated Hideaki by the time Tadakatsu arrives, the task will be much more difficult to complete. Whether you decided to get the first Special Reward or not, make sure Tadakatsu has your full focus. Defeat Ieyasu at the end of the map for Mitsunari to finally attain his sweet revenge.