Based on the blog of the Computer Role-Playing Games Addict.

Based on pen-&-paper role-playing games[edit]

Mega Traveller: 1: The Zhodani Conspiracy · 2: Quest for the Ancients

The series is made of shareware titles, all based on Dungeons & Dragons: Forgotten Realms games, all developed by Don Lemons. It starts with a trilogy of Gold Box clones, then continues with two Dungeon Master/Eye of the Beholder clones (but maybe the first one is just a demo for the other one).

Dunjonquest: The Temple of Apshai (Upper Reaches of Apshai · Curse of Ra · Trilogy) ·
Hellfire Warrior (The Keys of Acheron · Danger in Drindisti) ·
Sorcerer of Siva · Gateway to Apshai

Questron · Questron II · Legacy of the Ancients · Legend of Blacksilver

Phantasie · Phantasie II · III: The Wrath of Nikademus · IV: The Birth of Heroes

Alternate Reality: The City · The Dungeon

In addition to the titles below, two video game adaptations of pinball tables exist:

Crystals of Arborea · Ishar: Legend of the Fortress · 2: Messengers of Doom · 3: The Seven Gates of Infinity

The best-selling tabletop role-playing game made in Germany.

Precursors: The Dragons of Laas · Spirit of Adventure

A good offence is the best defence, therefore:

Given the amount of grinding in this game, just forget about that 10% more magic points growth.

Sketch for the character class triangle: 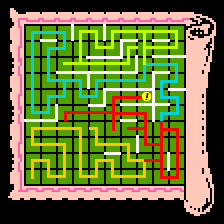 Notice that in the early titles the North American art is very different from the original Japanese, but the European box art depicts a Mega Man that is closer to the original.

The following games have no box artwork:

All this has still to be verified.

This password allows to easily unlock Akuma, if you get one further perfect victory (e.g. against Dhalsim or the Boxer?); furthermore, it allows to maximize the number of E-Tanks, because the four stages containing E-Tanks are still to be cleared.

The password was obtained by collecting the 4 E-Tanks without beating those four stages.

From a taxonomical point of view, there are 76 Pokémon species, instead of 151.

Of all the Pokémon species, the vast majority is inspired to real animals existing in nature, and they can be classified according to Lynnaeus method. Note that Lynnaeus lived one century before Darwin and the formulation of the scientific theory of evolution (Note also that "scientific theory" means "set of correlated theorems").

NOTE: Strictly speaking, "Invertebrata" is not an animal phylum, but a term of convenience including all phyla except for chordata. Here, it is used to group all the few animal pokémons that are neither Chordates/Vertebrates nor Arthropodes.

10 most disturbing moments in video-games[edit]

I'm looking for something that is MORE disturbing than the famous n.10... I need more video games...