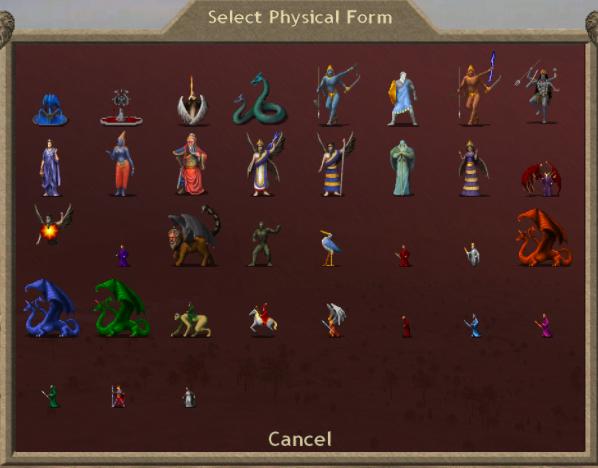 When designing your Pretender God, you must first select a physical form. There are great many physical forms to choose from, suited to accommodate many needs and playstyles. Most forms cost design points. Your physical form determines the following:

Some notable things to consider when pondering which pretender chassis is best fitted to your purposes:

The Pretender Gods can be put into different classes as outlined below.

Super Combatant
As the name implies, this god can take whole independent provinces by himself, right from the start. High Hit Points, Regeneration, Trample, Awe or Fear are big bonuses. Immortality (or a magical equivalent) is a must, since it is really only a matter of time before even the toughest Combat Pretender takes on more than he can chew and buys the farm. Since combat pretenders tend to accumulate Afflictions from fighting, Recuperation or Immortality is also of great help to keep them in top fighting condition (note that involuntary shape-changing (ie. from human to a Dragon) will sometimes cure afflictions in battle, but will NOT cure afflictions between game turns). Being swarmed by large numbers of enemies is par for the course for a super combatant, so developing multiple layers of defense is generally the rule (ie. Awe + high Protection + Ethereal + Eye Shield). Thus it is important to be able to quickly research those spells that protect and empower you in combat. Some of those functions can be gained by forging items, but that needs time and you want to use your combat pretender fast. Fatigue is one of the biggest threats for combat pretenders, so having either magical means of re-invigoration or 0 Encumbrance is key. Nataraja is a classic combat pretender.

Flying SC gods are great for MP expansion because they let you stake out borders for a large empire, claim good fort sites, then backfill without seeming to be too huge on the graphs.

A pretender designed with zero magic paths and a Dominion of 9 or 10 is a special sub-category of Super Combatant. High Dominion gives the pretender the Awe skill. The idea is if the pretender occasionally dies in battle, it is no big deal, since no magic paths will be lost and the pretender can just be recalled again by the nation's priests. The Wyrm is an example of a chassis that works well with this strategy.

Spellcaster
This god needs some troops to protect him. He is tailored to cast certain spells (like hurling lightning or raise clouds of poison) on the battlefield. These spells need some time to be researched. During this time, protective equipment can be forged, so physical might is not as important as for a Super Combatant. Keep in mind that fatigue is the biggest foe of battlefield spellcasters, so once again having high re-invigoration or 0 encumbrance is key. For this reason undead or animated statues make great battlefield spellcasters, since any carried equipment won't add to their fatigue. A Solar Disc with high innate fire magic could act as an effective Spellcaster from the start of the game.

High Bless strategy
This pretender god has lots of levels in one (or more) magic skills. Having 9 or more levels in a specific magic path when starting out bestows an extra bonus ability as well as a higher buff from that magic path to holy troops that are blessed in battle. Later in the game, the god can sit in his fortress and annihilate whole armies with high-level spells. High Bless gods can often double as Spellcasters or Super Combatants. Virtue can easily be a combined SC/caster/bless pretender thanks to her affordable cost and starting Air magic.

Rainbow, minor-bless strategy
Instead of many points of one magic path, this god has fewer skills in more magic paths. Having 4 or more levels in a specific magic path when starting out gives your holy troops a buff when blessed. There are many benefits to be a rainbow mage, such as magic versatility, high research and diverse item forging ability. He can travel the land and be very effective at magic site-searching. Rainbow mages are most of the time humanoid pretenders with cheap magic picks, although some nations have alternatives as well (ex. Fountains, Mother of Monsters, Skratti).

Note water mages don't automatically enable going underwater any more. This is an important change for all mages (not just for rainbow mages).

Bargain
This god is chosen by having the lowest cost of design points. The free design points can be invested in good scales and/or magic skills. The immobile 0-point costing Oracle is a good example of Bargain pretender which can also pursue a Bless strategy.

Special Skill
This god is created around a specialized skill like forging magic items, blood hunting or assassination. The Forge Lord for his forge bonus, the Fountain of Blood for its great blood hunter skills or the Great Druid for his sneaking ability are examples of special pretenders.

Go to top
← The Paths of Magic | Physical Form | Blessings →