The Grand Thaumaturgs are the leaders of the Death Cult.

The "new order" has proven to be substantially more dangerous than believed, and not just for the enemies of the Empire. The dead walk the earth, while the living struggle to avoid joining them. The Thaumaturgs and priests of the empire have some ability to control the dead, but the situation has become even more unstable with the rebellion of peripheral elements of the empire, such as the new nation of Pythium.

The nation still has legions, but now they are composed of an unholy mix of the living and the dead, and the chaos is not helpful.

The following pretender god chassis are available for Broken Empire:

All Ermorian priests have the ability to reanimate dead as per the spell, but with no cost in death gems. This means that given enough time, a group of Ermorian commanders can raise an army with no cost in gold, resources or gems. The type of undead that can be raised depends on the priest level of the commander:

Creating ghouls damages your population, while soulless require fresh bodies to reanimate. Longdeads will be reanimated at a constant rate regardless of available corpses.

The Ermorian Scout and Assassin are the same as their generic counterparts.

The Centurion and the Legatus Legionis are fairly typical Middle Era non-magic leaders, though the Legatus does come with the "standard" ability with an excellent radius.

The Ermorian Cultist is equivalent to the standard 50-gold independent priest, but they are cheaper and a better undead leadership. As an Ermorian priest, they can reanimate soulless or ghouls, making them a decent buy, but their only real purpose is to move about constructing temples. Otherwise, go with...

The Thaumaturg, at 1S1D2H for 130 gold is an exceptional buy. They are capable of reanimating soulless, ghouls, and longdead - if you're stopping in the wake of battle for some other reason, or are defending a fortress and have many corpses at the ready, Soulless come in much greater bulk (15 vs. 5). They can also cast the Communion spells - four Thaumaturg slaves and lets any number of Thaumaturg masters cast S3D3H4 spells, which is vital for such undead boosting spells as Power of the Sepulcher, Protection of the Sepulcher, and Unholy Bless. It's also worth noting that holy attack spells such as Apostacy, Smite, and Word of Power have 0 fatigue cost, so if you're worried about overtaxing your communion you always have these free options. Since your Grand Thaumaturgs are capital only and often best off staying still and reanimating longdead horse, the Thaumaturgs become your main field commanders for your undead legions. Unless you need an assassin or a Legatus for commanding human troops, buy one of these each and every round at each and every fort you have. If you do nothing else with them but leave them reanimating longdead, they will have paid for themselves many times over by year's end.

The Censor is an Ermorian commander that has the ability to command fairly large amounts of both living and undead troops (40/80/0). They are not undead themselves however. They come with a patrol bonus and are capital-only.

The Grand Thaumaturg is an excellent buy at 340 gold. They are 2S3D3H1? (100 AWSD 10 AWAD), which gives you some wonderful magic options and eventual access to the ocean. These will be your major gold expenditures round in round out, as you assemble an army of Grand Thaumaturgs each cranking out 5 longdead horse/round.

A priest level of three makes a group of Grand Thaumaturgs very flexible: they can stay at home and summon up replaceable armies of longdead horse, or lead your undead legions (casting Divine Blessing or Protection of the Sepulchre). Grand Thaumaturgs start in old age, but because of their levels in Death they are less likely to accumulate afflictions.

Broken Empire Ermor comes with a large number of troop choices, but most are characterized by three things:

The only ranged choice (other than javelins) available to Broken Empire is a standard Slinger. Dirt cheap (7/2), bad stats, bad gear, unremarkable precision (10).

The rank-and-file Ermor troops cost a great deal in terms of resource. Even the lowly Velite costs 10 resources, while most hover around 20 and the elite are 29 or 31. These resource costs pay for some decent gear, including a tower shield for everyone and some very nice defense skills. All this makes the living component of the Broken Empire armies tough to take down. They largely ignore missile fire, and even heavy cavalry charges take a while to chew through a shield wall of Principes. Their attack skills are nothing special however, and this means that the enemy troops tend to run up against an Ermor line... and sit there. Ideally, the undead then lap around the sides and start to chew through the enemy's flanks.

Amusingly, the elite Broken Empire troops (the Tritarius and the Praetorian Guard) start out at 55 year of age, which puts them in their dotage. The Tritarius may be worth buying if you need to take out some independent provinces with knights, because they are effectively armed with pikes.

Ermor has access to the Retarius and the Gladiator units, which are low-resource troop choices, but which only fight for a single battle before disbanding. This appears at first to be a poor use of your gold, but given the high resource costs of other Ermorian units they are a viable choice for rounding out your armies in a hurry if another player is attacking. Their stats are decent and their morale is excellent.

Broken Empire has two sacred troop types, the Shadow Vestal and the Lictor. Both are capital-only.

Lictors are not undead and can thus be commanded by someone who is not a priest or mage. They are heavily armored and have the high gold and resource cost you would expect from such gear (80/24). Their defense skill is terrible compared to other Ermorian (living) units, but their attack skill is comparatively high. They have a patrol bonus.

All in all, you can easily play Ermor with few or even no rank and file troops, relying instead on endless hordes of Longdead Horse to see you through, using blessed Shadow Vestals for easy expansion and durability. Only once you face determined anti-undead resistance is it necessary to enlist the aid of living troops, with their inconvenient upkeep costs and need to eat.

Middle Era Ermor gets no unique spells, though they are presented with a number of unique Holy spells that are automatically available without research. Among these are specialized versions of Charm, Haste, Resist Magic, and Curse... all available in some form to Ermor without allocating a single mage to research. 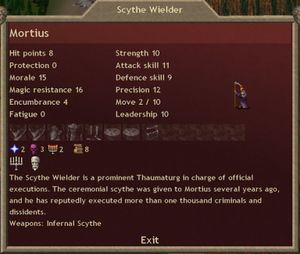 Mortius appears to be an odd duck of a hero. He is almost identical to any other Grand Thaumaturg, except that his defense and morale are slightly worse and better, respectively. A slightly better leadership (25/120/20) does not seem to make him anything special.

However, he does carry the Infernal Scythe, a magical weapon that will banish anyone wounded with it to the "Inferno". This could make him an interesting super-combatant killer... if he had a decent attack skill, which he does not. 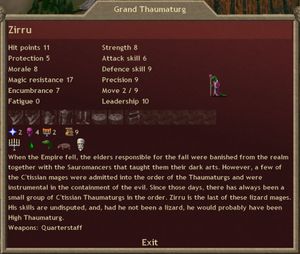 Although Zirru starts off at a very ripe old age (160+), this is not particularly ancient for a Sauromancer when old age starts at 150. That and his high level in death magic make it unlikely that he will accumulate afflictions due to old age.

Zirru comes with 2S4D, which makes him an excellent candidate for upping your death magic in the unlikely event that your pretender does not comes with a high level in death.

Some selected snippets from a thread on the Shrapnel Boards: