Dominions 3: The Awakening/Nations/Mictlan, Reign of Blood

The High Priest of the Sun is not only Mictlan's most powerful priest, but also a fire mage.

The empire of Mictlan is one horrific blood sacrifice. The neighbors of the nation live in constant fear of slavery or worse. Priests of their foul god spill the blood of countless victims to assauge the thirst of their pretender while the numerous armies of Mictlan are fueled by the bodies of their slave levies.

Mictlan is one of the races that you can play and feel really evil. To succeed, you must exploit and ransack your population, using their innocent daughters as the fuel that propels your infernal quest to conquer the world!

Mictlan uses Blood Magic extensively. In fact, Mictlan cannot spread its dominion using any method other than blood sacrifice. Neither your pretender nor your prophet will spread dominion for you and building temples serves no purpose except to give you a handy place to sacrifice virgins.

The following pretender god classes are available for Reign of Blood:

The unique pretenders for Early Era Mictlan are the Smoking Mirror and the Lord of Night.

Mictlan actually has a fair amount of flexibility in their troop and commander choices.

They have four flavors of Warrior, ranging from a naked guy with a shield, spear and sling to a guy in copper scale armor (protection 11!). All of the warriors cost 9 gold and differ only in terms of gear and resource cost (and the associated encumbrance and defense hits). Which ones you buy are a function of how much money you have to spend verses the available resources—if you've just spent all your cash on a temple, burn the rest of it on the heavily-armored warrior; if you have a lot of cash, buy hordes of the naked dudes and swamp your enemies with their bloodstained bodies.

The Feathered Warrior is the heavy-armor warrior with a Big Honking Hat. They operate as standards and can reinforce your units' morale. You should pick up a couple for each unit if you have the cash—Mictlan's base morale 10 is average, but who wants to be average?

The Moon Warrior is a heavily armored fighter wielding a two handed obisidan sword, and the one who is blessed with darkvision. They are not sacred, so no limit for producing them, even together with a low-resource sacred one for better resource utilisation.

Probably the most tempting thing about Mictlan's arsenal is the three (3!) types of sacred units that you can buy. Given the range of pretenders you can buy, there are all sorts of Bless Strategies you can try.

The Jaguar Warrior gets two lives: kill the initial form and they turn into were-jaguars, meaning that they effectively have twice their listed hit points.

Eagle Warriors get to fly when blessed, giving you a nice rear-striking force if you script your attack right.

Sun Warriors are essentially sacred versions of the heavy-armor warrior.

A word of warning: Jaguar and Eagle Warriors are the only Mictlan troop type that does not have a ranged secondary weapon. Unless carefully positioned or scripted otherwise, they will dive right at the enemy's ranks while everyone else lags back and throws rocks or javelins, often leading to a great deal of "friendly fire" casualties amongst the troops with those spiffy bless effects.

Mictlan has a nation-unique Scout. He has a sling. F34r the mighty sling!

Tribal Kings are the default non-mage commander. They, like most Mictlan commanders, are sacred and you must build a temple to recruit them. Don't forget that they have the "Levy Slave" ability—this allows your idle commanders to grab peasants, toss them pointed sticks and allow them to die for your greater glory. This lowers population slightly and causes no unrest.

The Mictlan Priest is your default go-to-guy for getting blood slaves. He's dirt cheap at 60 gold, which gets you B1H1?0 (10% FWSN); quite the deal. Send him out and he can build the support structures you need for efficient blood-hunting and sacrificing.

The Nahualli is the only non-sacred Mictlan commander (aside from the scout). S1N2?0 (10% ADNB) for 110 gold. The leadership is lousy (10/0/20), but they do give the nature-related supply bonus which is useful for keeping the hoards of slave levies fed and watered... not that you'd be worried about slave levies' health.

The Priest King is a good bargain at 175 gold for N2B2H2. He can lead 120 normal units along with a smattering of undead and magical troops, and as a bonus, they can levy slaves too. Most vitally, they are not old, so you'll get some decent service out of them. They are your main source of Jade Knives.

Rain Priests and Moon Priests are essentially lesser versions of the Priest King. For 15 gold less, they don't come with any armor, their leadership is gone (10/10/20), and the icing on the cake is that they are old. The only reason to buy them is to get access to the unique summons that their W2B2H2 and S2B2H2 paths give you, respectively.

The High Priest of the Sun is your preferred Prophet chassis. Although you get little direct dominions benefit from having a prophet, it does get you a level-4 priest, which can be nice. Out-of-the-box High Priests are F2B3H3, which gives you Divine Bless, essential if you are going for a bless strategy of some kind. The big down-side of the HPotS is that he starts off at age 60, so he is not long for the world. Give him a Blood Thorn and he can cast Rejuvenation (blood-6) on himself a few times, making him nice and spry for the ladies once again. With Fire-2, he is ready to cast some of the more interesting blood summons.

Mictlan Early Era has a slew of unique spells, mostly in the Conjuration and Blood schools. 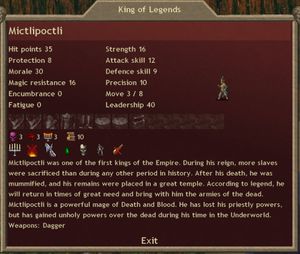 One of at least two heroes available to available to Mictlan in the Early Era, Mictlipoctli offers an excellent way to "bootstrap" yourself to a sizeable Undead Horde.

The second, much less powerful, hero available to EA Mictlan is Tepeyocatl. He's an Eagle Warrior commander, with guaranteed A1H2.

Recommendations on Scales for Mictlan[edit]

Order/Turmoil. Money is going to be up and down for a Mictlan player: your blood hunting is going to cause unrest and thus affect your income. Choosing high order scales may help, but then again you will not see the whole return on the investment of starting points. Going with high turmil on the other hand kind of goes hand-in-hand with the whole Evil Blood God theme.

Luck/Misfortune. If you go for high turmoil, make sure you take at least one level of luck. Turmoil-3 and Luck-3 go quite nicely together and the occasional supplement of 3000 gold from random events goes a long way towards funding that fancy ziggurat that your Rain Priest has always wanted.

Raising an army of Aztec undead[edit]

You don't usually associate Mictlan with hoards of shambling skeletons and moaning zombies, but there is a relatively easy method to become the Ashen Empire of the Early Era.

Research to Blood-5, and have a D2B2 mage cast Contact Civateteo at the relatively low cost of 25 blood slaves. The national hero Mictlipoctli can cast this spell right off the bat (no pun intended); otherwise, you'll have to find a D2B2 mage somewhere... like as your pretender, or by using a bootstrapped Tlahuelpuchi (a D1B2N1 flying assassin yours for 25 Blood at B6). I recommend either empowering for a very reasonable 30 death gems, or hiring a death-enabled mercenary to forge the initial Skull Staff needed. Once you have a single Skull Staff, you can turn the engine on - you can summon Tlahuelpuchi with virtually any mage, and every Tlahuelpuchi + Skull Staff becomes both a forger of Skull Staves and a summoner of Civateteo (as well as being a fairly nasty assassin, due to the trouble many commanders have with being skelespammed one on one).

A Civateteo is a D1B1H2 critter who has the reanimation ability, allowing them the summon up some number of undead each turn for free. Note the "free" part, it's important. Coming up with 25 blood slaves each turn is not a big deal, so you should be able to set Mictlipoctli to cast it on a monthly basis.

Even with only a single summoner, 250 terrified virgins later you will have 10 Civatetoes and 275 longdeads (assuming the minimum recruitment of 5 longdead per turn). A skeleton for less than one blood slave is a pretty good return on your investment to start with, but then those 10 civatetoes will turn out 50 longdeads a turn forever. For free. Your biggest challenge will be finding undead generals to get them out of your city. The Enchantment (2) Revive King is a good place to start if you want to keep your apparatus in place, but the Civateto makes an exceptionally good undead general herself, able to handle 105 undead by virtue of high leadership and paths in both blood and death.

And of course there is no reason to stop at 10. You could keep going forever and your undead factory output will increase geometrically until you find that your streets are choked with the risen skeletons of your former sacrificial victims.

Mictlan has a national unit called Moon Warrior. They have decent fighting capabilities, they are not sacred, but armored, using a two handed Obsidian sword, which can cause engough damage to punch through armor. They are not so cheap, and require production, which is often limited in scales strategies, however they have a special ability which makes them very useful: darkvison.

Either with your god, or with Mictlipoctli you can relatively easily cast the spell Darkness, which creates a whole-battlefield darkness, giving a great penalty to all other units. The Darkness spell is in the Alteration school, and is level 6, requires D4, so Mictlipoctli will need a magic item that boosts his death magic. The spell is very exhausting, so use Communion Master with some Nauhallis as slaves, also more magic gems were needed, but most likely works with Sabbath master and Mictlan priests.

There is a sacred bat daemon, which is summoned by a national spell. This has by nature darkvison, and can be a good flying companion for this team. Add a spy to the team, who carries the magic gems, and limits the use of them during battles, their hidden move makes it secure against getting killed in battle, or with blood slaves, getting used up by other mages.