In the fantasy world of Dominions sites of great magic power exist. These sites are filled with power than can be turned into Magic Gems used to fuel rituals and the more powerful battlefield spells. However, the sites are often hidden and they must be found by skilled mages. Sometimes the sites have helpful or harmful side effects.

The chance for finding magic sites can be set when starting a new game, and can have a big effect on strategy. Some maps however have fixed probabilities set by the map designer that cannot be overridden. The default is 45% for an Early Era game, 40% for Middle Era and 35% for Late Era game. This is further modified by terrain on a per province basis:[1] 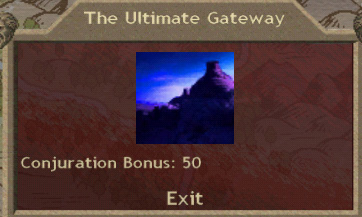 Most magic sites have a monthly magic gem income. These gems will go to your gem pool even if you don't have commanders or a laboratory in the province.

Some magic sites are visible immediatedly when entering the province but often these sites are either minor or have unpleasant side effects. Instead magic sites must be found by a mage.

All mages and priests have a special command called "Search for Magic Sites" which allows them to spend their turn looking for magic sites in the province. Searching for sites takes the full turn and all sites corresponding to the mage's levels and paths are always revealed, so if a mage didn't find sites during his first turn searching he won't find any new sites thereafter.

However this doesn't mean that there aren't unfound sites in the province. All magic sites have a hidden level of magic needed which ranges from 0 to 4 (note two exceptions can be found in Late Age Grand Cathedral H6 and Hall of Elders S6), with levels 1 and 2 being the most numerous and frequent. Level 0 sites are immediately visible, level 1 sites need a mage with 1 pick in the appropriate Path of Magic to find it and so on. Thus a mage with 4 picks in a Path of Magic will be able to find all sites available for that path when searching. So for example a Death 1 mage would find a Death 1 site in a province but he would miss a Fire 1 site or a Death 2 because he hasn't got any Fire magic and his Death magic isn't high enough.
Additionally each site has a frequency of occurrence that the game engine uses when determining which sites are placed on the map.

There are also ritual spells (mostly from the Thaum-2 school) that identify all sites of a certain Path of Magic in a province or in the case of Acashic Record(Conj-5 S3) and Voice of Tiamat (Conj-4 W2) look for multiple paths. These rituals can be set to be repeated until all provinces are scanned or gems run out. The power of a sweep from such a spell equals a level 9 mage searching the province. So for example the search spell Augury will find all Fire magic sites.

Occasionally you can suspect the presence of a magic site in a province even if you haven't detected one yet (note there are only certain sites that will do this). If you notice an unexplainable anomaly in the scales this might indicate an undiscovered magic site. For example, a friendly province has been under your dominion for some time, showing 4 or 5 candles and it should have Growth but the scales show Death. This indicates a strong possibility of an undiscovered Death site, so it is worth searching under that path.

The following is a detailed look at the maximum levels and paths needed to search all possible sites for any given terrain type.

While there are many different terrain types on land and many unique sites to be found, as far as a path searching strategy goes, land can be divided into Cave and Surface (ie. all non-cave terrains).

Surface
F4 A4 W4 E4 S4 D4 N4 B4 H4. This category includes plains, forests, mountains, waste, swamp, coastal and farmland. While there are many sites that are exclusive to one particular terrain type, generally speaking all land terrains have the potential of having level-3 and level-4 sites in all paths.
Possible magic diversity:

Cave
F3 A3 W4 E3 S3 D4 N2 B2 H3. No higher path levels exist. Although many sites found on the surface can also be found in caves, many cannot be found there and there are many sites exclusive only to caves. This selection of sites requires somewhat less magic to search successfully than on the surface.
Possible magic diversity:

Underwater terrain can be divided into 2 distinctive types for searching: sea (includes lakes) and deep sea.

Normal Sea
F1 A3 W3 E3 S3 D2 N2 H1. There are no Blood sites underwater. There are only rare level-3 sites for air, water or astral (Imprisoned Zephyr, Tower of Pearls, Arcane Gateway), but all of them can be found multiple times. The only E3 site is Iron Cliff, although it is common and can also be found multiple times. There is only one D2 site (Dying Ground of the Whales) and it is both uncommon and unique. The N1 site Kelp Fortress is common, so one should search in that path before building a castle.
Possible magic diversity found there:

Deep Sea
F1 W2 E3 S3 D1. No other paths are present. The only E3 site in deep sea is Iron Cliff, although it is common and can be found multiple times. There are only three S3 astral sites, although they are rare (Arcane Gateway, The Last Void) and uncommon (The Crater), the last two also being unique.
Possible magic diversity found there: Illithid Lord (Needs S3, allows mindblast)

Effects of a Magic Site[edit]

In many lands there are places of interest. These sites might be ancient towers, enchanted springs or great mines. There are hundreds of different places of varying rarity in the game. Most of these places are hidden but some are common knowledge. The known sites are immediately recognized when you conquer the land. Mages can search for magic sites.

Special sites have many different powers. Most are sources for magic gems. Below follows a list of special powers that sites may possess.