A sneak-and-creep to the Oracle w/ many powerful artifacts on the way. An easy scenario to complete on hard difficulty w/o losing any units.

You will note that Thrall's starting force eats only 16 food, but you are paying 31. In the cinematic, Cairne and 3 Tauren went elsewhere. Draw your own conclusions.

Destroy all crates, etc. for useful items. There are very many consumable items in this scenario that will not be mentioned in the walkthrough. You will not be able to take any of them on to the next level. Accordingly, don't hesitate to use any of them as soon as you find them. Fyi - some crates have enemies or harmless lifeforms inside. Initiate all attacks with your Hero. You shouldn't need to save the game more than occasionally. If you lose any units, you are DOING IT WRONG. Think covert ops. Think sneak-and-peek.

Protect your Shaman and Witch Doctor. Eliminate ranged enemies and casters first. Time is not an issue. Always heal up and wait for mana to regenerate. If in doubt, run away.

Remember that, while you cannot heal your units, Cairne regenerates health quickly and he has Reincarnate. Use this to your advantage. When in doubt, run away. 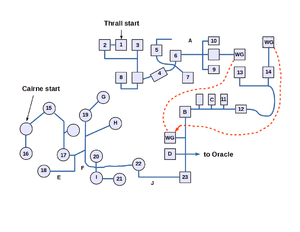 Note: Skirmishes, unless difficult, are skipped over - just win them without losing any units.

You will start with Thrall

Now you will use Cairne's group (Note: you still have control of Thrall's group)

Cairne's group must be very careful, because they have very limited healing capacity, especially the Tauren.

The mission ends as soon as you cross the bridge. Before you do this, make sure that you collect the most useful items that you found. In particular, Cairne should use the Tome of Agility. Redistribute the items that your Heroes carry. You could do this during the next scenario, but you are going to be very busy then.

The most important consideration is to upgrade Cairne's mana level and regeneration rate. The second most important consideration is to increase Thralls' size. Accordingly, Cairne should definitely carry the Pendant of Mana and the Sobi Mask, while Thrall should carry a Periapt of Vitality. The other items to definitely carry are the Crown of Kings, both sets of Claws of Attack, the Orb of Fire, the Belt of Giant Strength, the Pendant of Energy, and the Circlet of Nobility. Choose a Periapt of Vitality, Gauntlets of Ogre Strength, a Mantle of Intelligence, or the Lion Horn as the 11th item.

The specific breakdown of the last 4 items is

Important: As soon as you cross the bridge, the scenario ends, and Thrall is given a special item. If necessary, it will replace an existing inventory item, and not necessarily the one that you would prefer to lose. That is why Thrall should only take 5 items across the bridge. You did save the game as instructed, right?