Hours later, along the banks of the River Arevass, Malfurion and Illidan work together to pick up Tyrande's trail. Moving quickly through the woods, their skills and senses start working in unison--their twin wills bent on finding their beloved priestess before it's too late.

Optional Quest - Dam Trolls
Slay the Trolls and their Chieftain 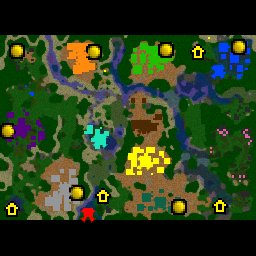 Despite the sense of urgency inspired by the mission, Tyrande has a trigger that makes it very unlikely she will die. The player has to actually help kill her.

Illidan's base is located in the northeast, Malfurion's base is in the far mid-west, and Tyrande's immediately west of the middle.

Malfurion will be harassed by the base to the southeast, and from the inaccessible base to the northeast. The northeast base drops units south of their base on Malfurion's side and come from the east when attacking the northern entrance. They will attack an expansion built at the northwest gold mine.

Illidan will be attacked by the base immediately west of his own, and possibly the inaccessible one. Attacks come from across the trees west of the goblin merchant.

The inaccessible base (orange) has the lowest food limit of all the undead bases.

Build up a strike force and hit the southeast base as soon as possible, while building up ancient protectors at the north entrance to his base. Entangle the second mine, uproot the protectors and move them to form a defensive line along the river's edge to the east, northeast. Uproot your other buildings, minus the tree entangling the mine and have them eat all the trees bordering the river on Malfurion's side. Plant huntress sentinel owls on the trees across the river on the inaccessible plateau, that they can reach with the ability.

Entangle the gold mine to the northwest if you wish, and fortify the edge of the river with protectors and elven archers with upgraded line of sight/range/damage (including roar if not distracted when a barge approaches). Any air barge destroyed before dropping troops deposits them back on their side of the river, where glaive throwers can hit them. Grab the Nature's Blessing upgrade for Malfurion's treants and buildings.

Do not give glaive throwers the ability to destroy trees, if it's not already researched. If it is then be very careful none of the trees with owls are damaged (destroys owl), and Malfurion's ability to summon treants isn't diminished.

Illidan can attack the base west of his own and seize a second gold mine (recommended), and has a third just west of the fountain far south from his base. The latter makes building reinforcements to attack the final base more convenient.

Train and upgrade at least 6 sirens, 3 myrmidons (ensnare) and 4-6 turtles and grab the infernal stone. Clear the trees bordering the inaccessible plateau on Illidan's side, in the small alcove where the infernal stone was located, and north of it using workers to attack trees or through selective harvesting.

When ready to attack the inaccessible base have Malfurion summon treants on the plateau and run them east, and use Illidan's new line of sight to summon the infernal down on the trees northeast of the crypt closest to him, just southeast of the haunted gold mine (if he wasn't able to do so blind). Lure enemy units into the destroyed trees and near the alcove to hit them with the sirens parasite ability to create minions on the plateau, and ensnare any units if they get in range of the few scattered myrmidons (so they can't retreat out of range). Let the dragon turtles stuffed in the northern alcove target the crypt, then the infected defenders. When enough minions have been created focus all summoned units but one on the statue/hero (if still alive), necropolis/tower, and acolytes. The other unit giving line of sight on acolytes/haunted mine for the dragon turtles positioned north of the alcove near where the golem was located, but hugging the edge of the plateau. Malfurion can only summon a limited number of treants, you can either summon them all at once or save one use in case the attack fails and you need line of sight for the sirens to try again.

Illidan can buff the summoned units near the edge of the plateau with scrolls of protection and healing, or place healing wards atop the plateau if he's retrieved them from the murlocs and Malfurion has transferred the set from his section of the map. Use boots of speed and potions of invisibility/lesser invulnerability to avoid fighting through the enemies along the southern part of the map, except the murlocs. Hiring the sasquatch mercenaries available afterward and keeping them idle at the mercenary camp will allow the cooldown to hire more to run out while clearing the inaccessible, and nearby undead bases so that by the time Illidan gets back he'll be able to hire more.

Once all future attacks on the brothers bases have been prevented continue normally with Illidan to accomplish the mission objectives and optimize items for the Blood Elf campaign.

There's a spot that allows the two brothers to exchange items along the cliffs west of the mercenary camp on Illidan's portion of the map, and through the undead base southeast of Malfurion's base. This is extremely useful for transporting items via Illidan into the final two missions of the Blood Elf campaign.

[Go to top]← The Ruins of Dalaran | The Brothers Stormrage | Misconceptions →