This level mostly consists of jumping across platforms. The Koopas you'll encounter here are no danger since they won't run off the platforms they're standing on. In fact, the Blue Koopas can be helpful if you have Yoshi, since you can use them to fly across the level. 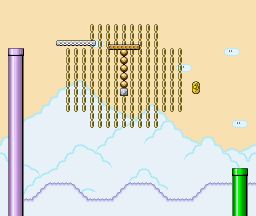 If you've beaten this level the normal way, you'll notice it just unlocks a loop that leads to itself, which isn't very helpful. To continue onward on the quest, you'll need to find the secret exit.

It's situated on a platform way behind the normal exit. To get there, you can either fly across as Cape Mario, or, if you have Yoshi, swallow the Blue Koopa and fly across the gap. Be sure to grab the three 1-ups from the turn blocks before you hit the goal tape.

The five Dragon Coins in this level are located as follows: