Iggy's Castle is the first castle you'll encounter on your travels through Dinosaur Land. You won't be able to take Yoshi inside and will have to go through the castle on your own. At the end, you'll have to endure a boss fight to beat this level and be able to continue onward. 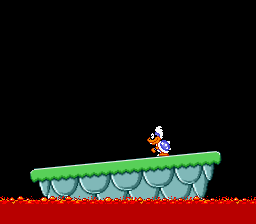 Once Iggy is defeated, you will be able to watch a scene where Mario destroys Iggy's Castle. You will then automatically march on to the Donut Plains.