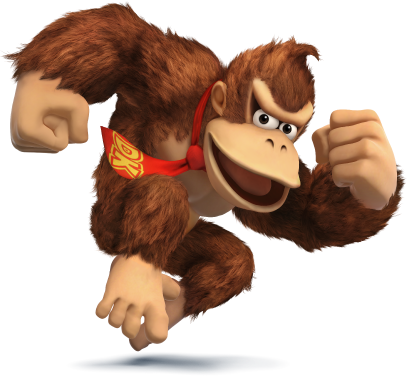 The King of Swing is back and better than ever. Donkey Kong is one of the more balanced super heavyweights in the game. Despite being one of the heaviest characters, he has great mobility and fairly quick attacks that lets him go toe to toe with more nimble fighters. His ape arms also give him great range, and his strength gives him powerful attacks to rival other heavy hitters. He even has some nice combos with his throws and aerials, something few other heavyweights can boast. Donkey Kong's main weaknesses are his lack of projectiles, forcing him to remain at melee range with his foes, and his terrible vertical recovery. Despite these flaws, Donkey Kong's many strengths make him a simple and solid character.

Donkey Kong is the second heaviest character in the game, with Bowser being the only character that's heavier. His dash speed is above average, slightly outrunning Mario and Wii Fit Trainer. His has the fastest air speed of any fighter near his frame and weight, while his falling speed is intermediate.

One of Donkey Kong's special abilities is his Cargo Carry. Donkey Kong is the only character that can jump while carrying heavy objects like Crates and Barrels. The way he carries and throws these items resemble his Forward Throw, DK's signature Cargo Toss.

Donkey Kong pulls out two conga drums and begins banging away, hurting foes with sonic waves. A rhythm meter will appear over DK, and his percussive performance depends on how well you can match the rhythm. Hit any attack button as the circles on the meter reaches the center. A close hit results in a massive shockwave, but a miss manifests itself as a pathetically weak pulse.

Konga Beat is effectively the simplest rhythm game in existence; anyone can play to the beat with near perfection with just a little practice. The important part is where initiate the attack. Perfect hits result in very large shockwaves, but there's still space for opponents to avoid it even on fairly small stages like Battlefield. Ideally, you should use it near the ledge, forcing your foe away from the center of the stage. This position makes it very hard for them to get back on stage without getting hit by each shockwave, forcing them to take hits until they're inevitably KO'd from raw knockback or failed recovery.