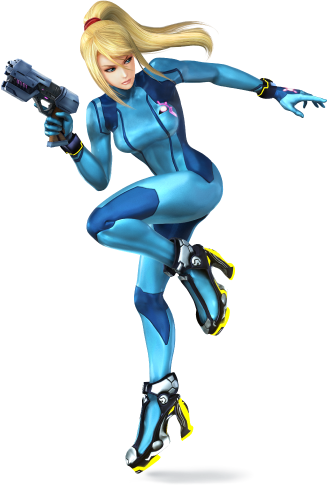 Samus joins once again as a suitless contender, this time with some added firepower from her rocket boots! Zero Suit Samus is a very well-rounded character suited for offense. She is very quick and possesses a range of speedy attacks, making her a very agile attacker. She also has good reach for a speedster archetype, from her long legs she uses to kick to her Paralyzer shots and whip, which let her take on a more defensive approach as well. Zero Suit Samus also has one of the best combo games in the roster, being one of the few that can reliably combo into her KO move, Boost Kick, off of a grab. However, Zero Suit Samus's high jumps, which usually helps her continue air combos, makes it harder to connect her strong aerial moves against grounded enemies. For how important her throws are for racking damage, she also has a very slow tether grab. Nevertheless, Zero Suit Samus is a powerful character and a dangerous opponent, packing both speed, damage and reliable KOs.

Upon losing her bulky power suit, Zero Suit Samus's weight drops from being the heaviest humanoid character to one of the lightest. However, without her armor weighing her down, Zero Suit Samus becomes much faster on all fronts, from attacking to dashing to advancing in the air. Strangely, she also falls much faster than regular Samus. Zero Suit Samus has a pretty high jump, and this combination of high jumps with high fall speed may give her a similar feel to Greninja.

Zero Suit Samus jumps into her iconic spaceship and flies into the foreground. After that, you view the screen from the gunship's perspective. Use the reticle to aim and press any attack button to fire powerful twin lasers at the spot your crosshairs are aimed at. The twin lasers hit multiple times and launches foes after they end. Zero Suit Samus gets five blasts before the Final Smash ends, although Gunship can also end if you take too long to use up all five shots. Gunship is a pretty effective Final Smash, giving you absolute invincibility for its whole duration while having the range of the entire screen, but the drawback is the laser blasts aren't particularly strong. Try to land multiple consecutive shots on a foe as they get knocked closer and closer to the edges of the screen to increase your chances of a KO. If you miss by a hair, you can still move the crosshairs a bit while firing to fine tune your aim.