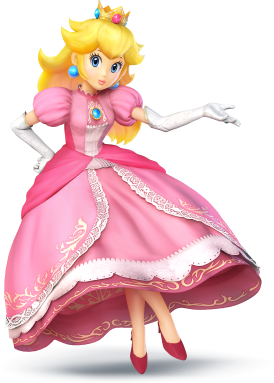 The ruler of the Mushroom Kingdom returns with a couple of improvements! Peach has some of the most unique movement in the game owing to her float, which lets her mix up her jumps and aerial approach very effectively. This feature combined with Peach's useful aerials make her a very strong fighter in the air. Peach also has some powerful tools at her disposal, with a combo throw, a versatile projectile and an excellent recovery. Peach's weaknesses would be her poor movement speed which hinders her ability to weave around or press the attack, as well as a bit of difficulty KOing. Peach is definitely not an easy character to pick up, but her bag of tricks make her an unpredictable contender in skilled hands.

Peach falls at the lightweight side of the humanoid characters, being slightly lighter than Marth. Her speed is pretty poor, way below average in terms of both dash speed and air speed. Peach's jumps are moderately high, and she is one of the floatiest characters in the game, more floaty than Rosalina. A trait exclusive to Peach is her float, which lets her suspend herself in the air once per airborne time by pressing down while holding the jump button. Peach can still move back and forth and use attacks while floating, making it an effective tool for poking and pressuring foes.

Peach does an enchanting dance that damages foes, puts them to sleep and spawns three massive peaches, each can be consumed to heal 20%. Unlike other moves that induce sleep, this attack will instantly put airborne enemies in a helpless state, which can potentially doom them if they're offstage. Peach Blossom is very different from conventional Final Smashes in that it doesn't specifically help her get KOs. Instead, it disables nearby foes to leave them vulnerable to Peach's normal attacks, while giving her very strong healing items that can effectively remove half a stock worth of damage when consumed completely. You need to find a balance between healing up and smashing enemies away, as foes that wake up quickly enough can steal your peaches for themselves.