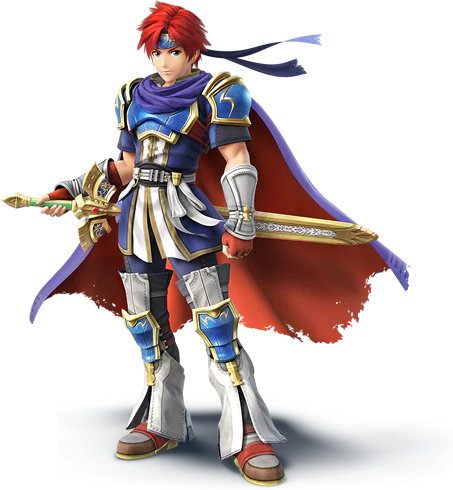 Another melee character makes a comeback, this time being the wielder of the Binding Blade: Roy! Roy shares a lot of his moveset with Marth, but he is by no means another Lucina. Roy's Binding Blade works the opposite way of Marth's Falchion, being stronger near the hilt than at the tip, and it is shorter than the Falchion overall. Roy is also generally faster than Marth and has quicker attacks, letting him take on a more aggressive and mobile playstyle. Unfortunately, Roy's inverse tipper mechanic is a double-edged sword, reducing his range advantage by forcing him to attack up close. Roy's recovery is also one of the weaker ones in the game. Regardless, Roy is still a very solid character, a contender for the strongest swordsmen in the game.

Roy is a middleweight, being quite a bit heavier than Marth and Lucina. His speed is excellent in just about every category. In terms of ground speed, Roy can outrun the likes of Pikachu and Meta Knight, while he moves through the air faster than Wario. Roy also has a high falling speed, giving an agile feel to the character.

Roy spins his blade around him, then finishes with a powerful slash. Although it shares a name with Marth and Lucina's Final Smash, Roy's Critical Hit has very different properties. Since Roy performs the whole move in place, its range is limited to the reach of the Binding Blade. It can also harm enemies during the animation leading up to the critical hit, making it more effective at successfully connecting. Like most of Roy's other attacks, you want to be close to your enemies to help you land this move. The ideal position is for your back to be facing the enemy, as enemies behind you will take the most damage when you initiate the Final Smash. The finishing strike has more range than the initial swing, which might catch some opponents off-guard.