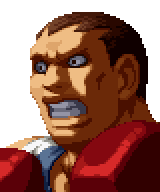 Balrog is the disgraced boxer, turned Shadaloo henchman. Although he's towards the bottom of the totem pole of the crime syndicate, he has grand ambitions of running organization (although most assume he would run it into the ground). Balrog may be strong, but when it comes to brains, he is running on empty. He's very much an act first, think later type of guy. He is quick to dismiss potential threats by underestimating people's strength just on their appearance, yet quicker witted people like Chun-Li know how easy it is to push Balrog's buttons and get a rise out of him. If Balrog does find someone who looks like they might be powerful, like Akuma, he suggests that they help him wrest control of Shadaloo away from M. Bison. He is even brazen enough to declare his intentions to Bison himself... again, he's not that bright. Few people see any use in dealing with Balrog, although Kim sees him as another potential rehabilitation project (even Choi tries giving it a shot, which should say something about Balrog's demeanor), and Poison identifies Balrog as a great "heel" for Hugo's pro-wrestling act.