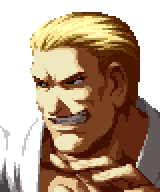 For more information about Geese, see his Fatal Fury and Capcom vs. SNK entries.

Geese Howard is the embodiment of self-confidence. Geese encounters no challenge that he expresses even an ounce of doubt over. While many characters consider Geese to be an evil person, he evidently believes himself to be morally equivalent to everyone else, as evidenced by his discussion with Dhalsim, "If I'm evil, then everyone is." He mocks Akuma's ability, and only suggests being impressed by witnessing Shin Akuma's power. Upon meeting M. Bison, Geese considers himself more capable of running the world than Bison is. Chun-Li perceives Geese as a criminal that must be brought to justice, and Guile wrongly assumes that Geese is planning on joining Shadaloo. Geese appears to be genuinely interested in obtaining the power of Orochi, and attempts to learn its secrets from Goenitz and Iori. However, Tessa is interested in the power that he has already obtained through the Secret Scrolls of Jin (in Fatal Fury 3: Road to the Final Victory). Geese immediately sees through Takuma's disguise as Mr. Karate, and the two speak of Geese's growth since childhood.