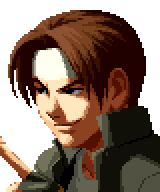 Kyo Kusanagi has a complete opposite personality from his rival Iori. Kyo is generally upbeat, with a slight attitude from constantly being underestimated by older adults. Despite his young age, Kyo is very confident in his natural fighting abilities, and with good cause. Kyo delights in battle, though his frequent wins have not taught him much about respect. Even good natured challenges offered to him from more experienced fighters such as Ryu and Ken are met with a haughty assumption that he will wipe the floor with them. He never accepts responsibility for the humiliation that his opponents might suffer from their defeat. He is sensitive to the presence of great power, especially when he encounters Demitri, who gives him the sensation that his blood is boiling. And like many boys his age, he is certainly interested in attractive ladies (despite already having a girlfriend), yet he doesn't show any appreciation for their potential as fighters and worthy opponents. In the end, every competition that presents itself to him is met with satisfaction, with little thought given to the consequence of his actions.