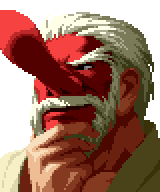 For more information about Mr. Karate, see his Art of Fighting entry.

Mr. Karate is actually the man known as Takuma Sakazaki, the father of Ryo, but Mr. Karate refuses to tell this to anyone. He is quite insistent on maintaining his secret identity, even though nearly everyone who he has fought against in the past seems to recognize him almost instantly. The only time he expresses any concern over his identity being revealed is when Choi almost says his name. Only Ryo seems to know for certain. Dan believes that he is some man trying to upset him by posing as his father. Regardless of whether they know his identity or not, truly perceptive fighters can tell just how powerful he really is, despite his chosen appearance as a really old man wearing a tengu mask (the gray hair is part of the mask, Takuma's hair is brown). Even Vega seems oddly humbled (or disturbed) in Mr. Karate's presence (though this might be due to Mr. Karate's hypocrisy in concluding that Vega has no self-confidence because he fights masked - like Mr. Karate himself does). He preaches the importance of developing the mind in addition to developing the body, a notion which the less perceptive fighters dismiss as the ramblings of an old man. This form of Mr. Karate is merely interested in testing other fighters and illustrating to them where their skills are lacking. Tessa is impressed with Mr. Karate's power of perception, and he and Zero seem to be mutual empathetic to one another's responsibilities.