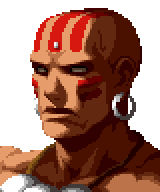 Dhalsim is a practitioner of the mystic arts of Yoga. Dhalsim is an exceptional master of Yoga, and has reached such a heightened state of enlightenment that he has complete control over various aspects of his physical body. As a result, he is capable of doing numerous amazing feats, such as stretching the length of his limbs, and lifting his body off the ground through sheer will. Dhalsim is a pacifist, and does not fight to compete, but rather to teach and enlighten. Dhalsim has encounter skeptics to frequently that he knows the quickest way to convince people of his teachings is by demonstration through combat, as he concludes with Tessa. Dhalsim only seeks to aid and protect, only wishing harm on those he can tell wish to harm others, such as when he encounter Demitri and Goenitz. Some people who encounter Dhalsim are very curious, and wish to know what he can teach, such as Kim and Kasumi. Others refuse, some less politely than others, but Dhalsim always offers, especially when he believes that Yoga can save someone, like Geese. Dhalsim is surprised, however, to find out that even Yoga cannot help him understand the Mars People, nor can he scry any secrets from Zero's mind.