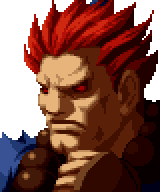 Akuma revels in the power of the Muderous Intent, or Satsui no Hadou. He has willingly forsaken his own humanity to tap into the upper limits of his fighting capabilities that are normally closed off to human beings. He now wanders the Earth, constantly seeking an opponent worthy of his destruction. He is not interested in mindless murder; he only wishes to fight those who are worth his time. Thus, if he encounters someone that he considers to be too weak to bother with, such as Chun-Li or Kasumi, he gives them a chance to walk away. Dhalsim and Kim are interested in freeing him from the evil path that he walks on, but Akuma walks it willingly, and will not be persuaded otherwise. Geese finds Akuma's acceptance of Satsui no Hadou pathetic, and believes that he can always triumph over anyone who has to stoop so low to acquire power. On the other hand, Serious Mr. Karate shares a mutual respect with Akuma for each other's fighting talents. Akuma knows many of the fighters he encounters, whether for the first time as with Kyo, or for a repeat challenge as with Ryu. M. Bison certainly does not forget the man who nearly murdered him. Akuma is intrigued by the power that drives Shiki to mindlessly roam the world, killing all those who are not the man she is seeking.