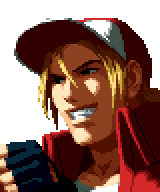 Terry is a very good natured person. He is confident in his abilities, and rarely thinks ill of anyone beyond Geese Howard, the murderer of his adopted father. He is the brother of Andy Bogard, who is not present during the events of SVC Chaos, much to Mai's dismay. He enjoys a good fight, especially when he senses a similar competitive spirit in opponents such as Kyo, Ryo, and Ken. Ken's ability is well known to Terry although they haven't officially sparred until recently, and Terry is aware that Ken is not himself when he encounters Violent Ken. The game calls in to question Terry's eyesight; while it's understandable that Terry mistook Dan for Robert Garcia at first, the fact that Terry mistook Sagat for his friend Joe Higashi just because they're both kick boxers is highly suspect. One is tall, overly muscular and bald, while the other is of average height with a regular, yet well-toned physique and a tall head of hair. Terry likes to keep most of the intimate details about his life private, which is why it comes as such a shock to him when Guile inquires about his relationship to Blue Mary.