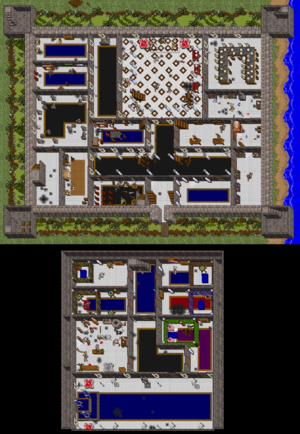 Map of Castle of the White Dragon

Castle of the White Dragon[edit]

To find out where the Banes are there are several Methods available. You can check Magic Lens from Temple of Enthusiasm, Web of Fate of Temple of Tolerance and Moon's Eye from Temple of Emotion to see where they are. Or you can also call the

Hound of Doskar to track Iolo's Lute, Dupre's Shield or Shamino's Book (which he got from Beatrix).

The Castle is at (33S, 86E) between Great Northren Forest and Gorlab Swamp, but before you enter the Castle you need to make sure you have 3 Prisms charged and Black Sword repaired with Flux Analyzer. If you come near the Castle, then many Jester will appear and attack you. At the Entrance is a Scroll which invite you inside. 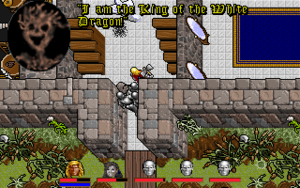 Ghost of the King this Castle.

Ice Dragon. Go upstairs and go down the other Stairs to enter the Musicroom. Mad Iolo will appear and call a

Ghost and vanish again. Kill it and take the Key under the Whistle on the Table. Go in the Mirror Room to the right. Mad Iolo will appear there and will give you a Show. He disappear and the Mirror shatter and turned into Clone of the Avatar and attack you. Kill them and open the Secret Wall at Bottomright which lead to the Lab. Get the Key from the Corpse and maybe some Potions here.

Open the Door with the Key you just found. Go to the Library with the Key you found in Musicroom. Mad Iolo will tell you to read the Books. That is a Hint that the Books are Explosion-trapped. Go upstairs and downstais the other Side. Anti-Shamino pop up this time and called a

Nightmare for you. Get

Invisibility Scrolls and the Key from the Drawer. 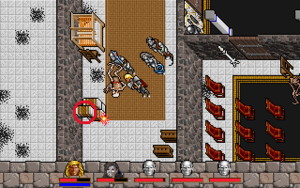 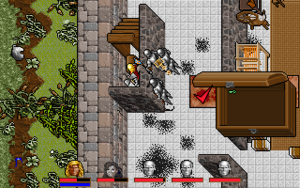 The Wall behind the Stairs are Fake.

From here there is 2 possible different Path to take: 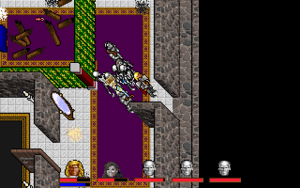 whenever you came from the East or West. Pick the Door to the Nursey and get the Blue Key from the Drawer. Go downstairs and Mad Iolo will send a

Gazer after you. Open the Bedroom and get the Purple Key from the Drawer. Open the West Door with the Blue Key. Click on the West-Wall Southwest. Go South in the Secret Path and open the Wall into the Southern Room. Pull the Lever there to open 2 Secret Wall. Go back and go South and enter the Playroom to the West. Mad Iolo send more

Headless after you. Kill them and pull the Lever to open a secret Wall in Eastern Room. Go into King's Bedroom and take the Red Key under the Wood debris and enter the Secret Pathway, but doing that called some

Skeletons. Go North and pull another Lever to open another Secret Wall. 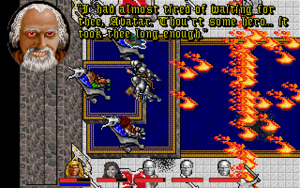 Fight with the Banes.

Go in Thronhall and go to the 3 Banes, but beware there are Traps on Statue, so destroy it and if you are near them, then a lot Fire Fields will appear. You can also cast Dispell Field to create a safe way through it. Fight the Banes. When the first Bane fall, then use the Blacksword on one of the Prism to capture the Bane into it, then repeat with the next Bane until all 3 Bane are captured.

Which Bane goes in which Prism:

Next come the Preparation with your old Companions.