If you haven't freed Captain Hawk from Bull Tower, then go to Inn of the Sleeping Bull and do so, otherwise you can't go to Moonshade. 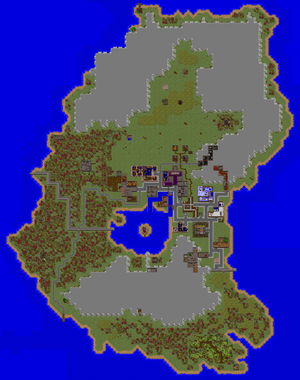 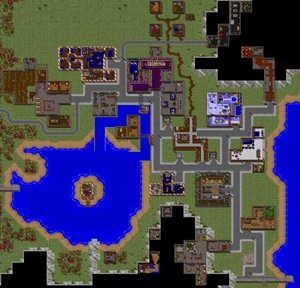 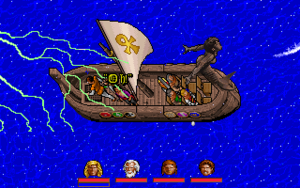 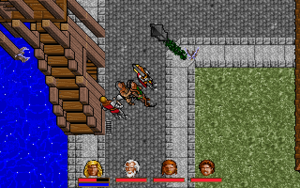 Right of the Stairs is a secret Wall.

Go to the Seminarium (93S, 150E) and talk with Fedabiblio about a

spellbook. He wants you to bring him three

Mandrake Roots plundered on Monk Isle. In his desk is also a key. In his house are also Freli, the son of Delin in Fawn. Talk with him about his father. He will then give you a scroll which you can give to Delin when you're back in Fawn. There are a lot of Reagents,

Magic Scrolls (Heal, Translation, Create Food) to grab. In the bed rooms are an Amulet of Protection and a Magic Compass (There is also a scroll in the library that tells you how the compass works and there are some book which give you useful information).

Gustacio's house is at (91S, 152E) and there is only one thing of interest (asides from a few reagents on the table and scroll besides it which tells you Gustacio has trouble with the Blink Spell) and its the

Magic Scroll in the basement. Its a ninth circle spell called Summon. So don't waste it until you have the

Spellbook and transcribe it into it.

Lighting Whip which is protected by

undead. There is a secret wall to the north. The door behind it can only be opened with the key from Pothos' house. It has a teleporter which leads to a football field with some Ice Trolls and Magical Ice Creatures. At the goal line is a blue chest with some nice stuff like

Fire Sword and two Potions. BUT the teleporter doesn't work so the only way is to let yourself get killed after you have looted the chest (or use the blood letting device on yourself to commit suicide).
Ship-Bug
If you talk to Captain Hawk while Kane and Flindo are asleep,then the Game may get stuck. So talk to him only if both are awake!

Columna's House at (85S, 150E) also has some stuff. First take the Key from the chest and unlock the Door to the basement with it, but beware there is a nasty trap there. Get the Green Key and

Magic Scroll (Time Stop, another 9th Circle Spell) in the basement and go out again. Next is Stefano's House at (82S, 152E) which is empty and the only thing to take is the Green Key on the table. So continue on to Torrisso's house at (84S, 142E). The chest has some reagents and the nightstand has a

Magic Scroll (Reveal) and there is a Yellow Key on the chimney. 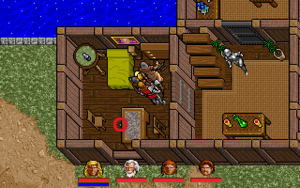 The Apothecary is at (79S, 138E) and has quite a lot of stuff to sell. The two chests are pickable and have:

Mind Blast scroll. Do note that Pothos is not available until after the banquet, but you can enter the storeroom with the key which is hidden in the bedroom. Move the left chair away from the desk and take the key. Unlock the door to the storeroom and take the magic stuff for yourself. The Palace is at (72S, 139E), but it's locked so you need to speak with Flindo about meeting the MageLord.

The Provisonner is at (73S, 134E) where Bucia sells some stuff. She is also the only one on Serpent Isle who buys gold bars, so sell them to her, but as for gems you better sell them to Topo at the market. There is also a

Magic Sword at the Market near the Forge. The Rangers reside at (73S, 127E). Get the key off the desk in northern half and use it on the door near the stairs. There is a

Magic Scroll (Enchant Arrows) and some stuff in the chest. Beside it is a lever which opens a secret wall below. Go down the stairs twice and pull another Lever. The Scroll behind another secret wall only tell you how to make good wine.

Restoration scroll. There is also a shiny Golden Key on Torture Table. There is a hidden Lever behind the last Stone bier.

Talk with Flindo at the Market (or Pub, Bucia's Shop, his House...) if not done already and ask him about meeting the MageLord. Now wander around in the city, talking to people, looting the houses, etc until you get visited by an Automaton which gives you a talking

Magic Scroll from Rotoluncia. Use it to talk to Rotoluncia (do not use it before speaking to Flindo or else you will be stuck in Moonshade for a long time, for you will never get the invitation to the dinner with the Magelord). She wants the knowledge to command demons which was traveling with Batlin. Naturally you don't have such knowledge, so you say no to her. 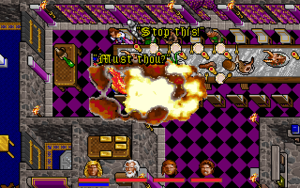 another Banquet in Chaos 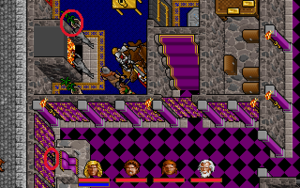 Magic Scroll). He tells you that he was successful so you only need to wander around until you are summoned to the Banquet where the MageLord greet you and introduces you to the three Adepts until Rotoluncia accuses you to be behind the Teleport Storm and attack you, but Gustacio prevent it. She will then teleport away and Pothos will come in and report to MageLord that there was no

Blood Moss found, so MageLord stop the Banquet. You are now free to walk around in the Palace. In the Kitchen are 5

Create Food Scroll and the Library have one

Translation Scroll. There is also a Lever behind the Stone Throne which open way to the Treasure Room which has 4

Gold Bars and 3 locked Chest. The Key for the 3 Chests are in the Bed-Room near the Chimney. Move the Potted Plant north of it away and take the Purple Key. In all there is:

Gold Nugget and a Virtue Stone (probably a Program Error since it shouldn't be in SI). 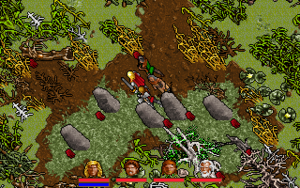 Now go to Bucia and ask her about Pothos. She will tell you how Pothos look similar to Erstam. With this Knowledge go to Pothos and talk with him about

Blood Moss and secret. Agree to find some

Blood Moss for him. Pothos will also teach you how to make

Bloodspawn. Now go South of the City to the Swamp at the Entrance (127S, 153E). The Path leads, protected by

Slimes, to a "Isle of Blood Moss" Take it and go back to Pothos.

Blood Moss. Now leave the Building just to see someone from your Party disappeared. Go to MageLord and tell him of it and tell him you suspect Rotoluncia. He will then tell you to inspect her House in the Northeast.

Rotoluncia's House is at (74S, 155E). One Automaton will stop you and ask you to leave. Ask him about kipnap and he will attack you. Pick the Chest for

Fire Snake Scroll and Red Key. The Red Key open the Cell where the Naga is imprisoned. The Scrolls are not important, since it only tell thee of Romantic Story of Rotoluncia and Filbercio. Be sure to take along the

Serpent Tooth in the Bag on the Table. 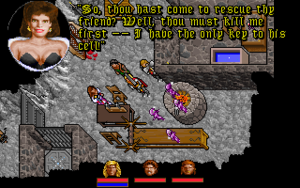 Go back to MageLord and tell him you found nothing. He will now tell you of the Love Palace in the Lake and give you permission to use his Boat to reach it. Go to the Island and go up and take the Key from the Cupboard. Go in the Basement and unlock the Door. Go to Rotoluncia. She will ask a last time for the Secret of Gargoyle Controlling. You still don't know it so you must fight her and 4

Magic Gremlin. Take 2 Purple Key from the Corpse and free your Companion with one of the Purple Keys. You can also use the same Key to open the Door with the Teleporter which bring you back to MageLord's House.

Now you're done in Moonshade and its time to go to Mad Mage Isle.

Everything in Moonshade can be buyed with

Serpent Scale. In the Basement may be a 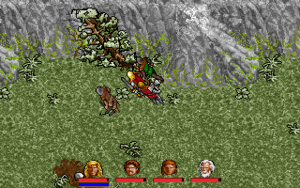 Behind Tree is a hidden Cave.

At (94S, 97E) you will find a House where one Dark Monk and Dark Witch live. Kill them and get the

Great Light Scroll along with the items on the dead Boy's body. A

lock picks, and some Dust of Invisibility.

At (83S, 101E) is a Hollow Tree which contain a Key. Take it and open the House left of the Tree. Unlock another Door inside and run fast to avoid a Trap. In the Drawer is one more Key to take. In the left Chest are:

Ratmen in the Catacombs.

At (56S, 125E) is sort of a Water Tower with a Telescope which show you of a Gargoyle with a Bridge and around are Lava (This is in Furnace). There is a

Fire Ring Scroll to pick up.

Poison Dagger and some

Spider Silk there. There is also another

Infinity Bow hidden under Spider Statue and can only be obtained by hackmoving it.

Ask any Ranger at the Fort and they will forward you to Commander Julia. Talk with her about

strange Wine and she will tell you that its indeed taken from Rangers Fort. That

Mutton is long by eaten so you get nothing in return and you dont need to return the Ice Wine either.