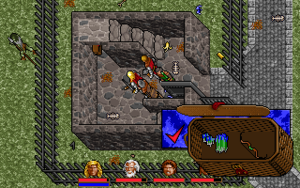 Before you arrive at Fawn you will come to the Fawn Tower (95S, 7E) which is very dirty and overrun by goblins. Take some time and clean up by killing all goblins in and around the tower. You will know you are finished when the garbage is gone and Monitor pikemen once again occupy the tower. There is a secret wall beside the stairs and behind it is a basket containing a

Take the white paved bridge into Fawn. When you arrive at the entrance, a Fawn guard will tell you to behave yourself in the city. You will also encounter a Fellowship member named Ruggs, who will ask you to deliver a letter to Delphynia. Agree to the task and enter the city. 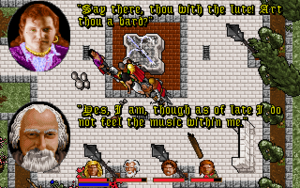 When you come across the fountain near the entrance for the first time, a teleport storm will occur and deposit a second lute. If Iolo is in your party at the time, people will ask for a song.

In addition to Ruggs's letter, Delphynia (69S, 18E, that is the south-east corner of the town) can also give you the

Varo Leaves which can cure the Avatar's poison.Take the leaves to Harnna in Monitor to be cured and then return to Fawn.

After Delphynia reads Ruggs's letter, she will give you a letter to return to him. Back at the entrance, give the letter to Ruggs. He will thank you for it and send you to Scots at the Fellowship camp (76S, 22E) to get a very useful

map of Serpent Isle. Press M to see the map. If you carry a

sextant, you will also see your location on the map (represented by a yellow cross). 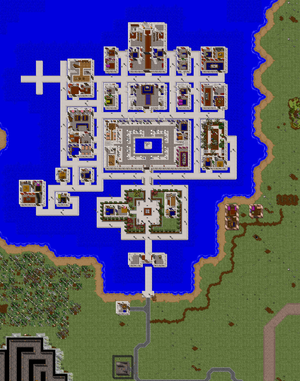 The city of Fawn can be divided in four quarters. A canal with a single bridge separates the south quarter from the rest of the city. The palace and the temple make up the center of the city. A few buildings are to the east, a few more to the west.

East of the fountain is the shop of Delin and his Daughter Alyssand (75S, 13E). Go down the stairs and pull the lever by them and go down another stairs. Grab some food and

lockpicks if you need it and pull another lever partially hidden by the barrels. Go back up and go though the now open wall. The only interesting thing is the hidden bag behind the barrel which contains 50

West of the fountain is the sleep-house (74S, 7E) of Delin and Alyssand. There is nothing important except few

Filari in the drawers, so continue North to a crossing.

From south to north

Filari and some food, the only interesting stuff to grab are the reagents in the locked chest.

Go back and enter the next house (61S, 19E) North of Delphynia's house. It is where Captain Voldin lives. In upper floor there are a lot more

Filari to grab along with a plate armor set (though the boots are missing).

black potion and some money. On the balcony there is a crate with 60

From north to south

Go all the way west again and enter the big building (56S, 3E). In two crates there is some

The tavern is at (61S, 3E) and Jendon can give you info about people and strange objects, just like Harnna in Monitor. In his bedroom is a gold key that opens the bedrooms doors; he will give it to you for free if you follow the plot. Go down in the basement and pull the lever by the

spear. In the pickable chest are 99

Filari and two potions. In one of the barrels are some reagents to grab.

boomerang in the locked chest.

Garth's house at (74S, 4W) is locked so pick it open and go in bedroom. In drawers is a

Filari and in pickable chest are another 86

Filari and dust of invisibility.

From south to north

The royal palace of Fawn consists of four buildings connected by bridges.

North of the palace is the temple, that consists of three buildings connectedby bridges. Unfortunately, most doors are locked and impossible to be picked; 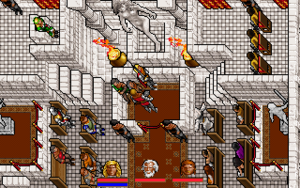 Go around talking with people, preferably in the tavern. Some time later Alyssand will come to you and ask for a favor. She wants you to free the city from the evil schemes of Voldin. So agree to help her. After you've talked with Alyssand, Zulith will follow you. Talk with him and accuse him of following you. He will go away, but later another one will come after you.

This time it is Kalen, a companion of Batlin, who wants your head. Kill him and he will spit out some last words like Batlin will triumph over the Avatar at last. Some time after that Jorvin will come to you and ask you and Iolo to come to Throne Room at noon, because Lady Yelinda was touched by the song sung by Iolo. Lady Yelinda will then give a White Diamond Necklace to Iolo. Dupre will then say something about Lord British and Jorvin will jail him and send you and your party to sleep.

Upon awakening, you will find a scroll on the nightstand, so read it. It says you must be at the Temple for the trial. So the next thing to do is going to the Temple and witness the trial, which is a farce. After the first day of the trial is over talk with Alyssand. She will give you a key for the Temple where Dupre is held.

Go to the Temple again and open the west door with the key. In bag on the table are 3

gems. Go down the stairs and pull the lever and go up the other stairs. You will catch Voldin messing around with levers which control the Oracle. He thought you were Kylista and attack you to not let you reveal the Oracle is corrupt. Kill him and pull the center lever first, then the rightmost. Oracle will then speak to you. Tell it to change the revelation and say that the trial is corrupt. (If you tell the Oracle that Dupre is innocent instead of trial is corrupt, then there will be a difference in the outcome of the trial: Kylista will not be jailed.)

Now you're done and you need to wait the next morning to resume the trial. You can do what you want in the meantime or just sleep it through. Eventually, go back to the trial. You may call witnesses or not, it is not important. The Oracle will declare Dupre innocent and announce Kylista and Voldin guilty. Jorvin will come back to the temple and tell Lady Yelinda that he has thrown Kylista in jail and found Voldin dead. Lady Yelinda will offer her apologies to you and give Dupre the

Crystal Rose of Love. You will need this item later.

Next goal is the Inn of the Sleeping Bull.

Everything in Fawn can be bought with

food while you have all his

Filari. He cannot give the food back and he wants the

Filari back, but only if you buy something from him.

Youcan go to Delin's shop and talk with Alyssand about the

silver ring (or talk about it later when she come to you). She wants you to keep the

ring and will give back the

breast plate for the

magic armor, but it is best you ignore her and go to her house in the north-west (at 53S, 5E) and get

your magic armor along with some potions and