Before you start exploring the Cave you need to prepare some Cloaks,

Fur Hats beforehand. At the end of the Cave you will enter the Frozen Lands. If you are not wearing warm Clothes you will freeze to death in no time. The 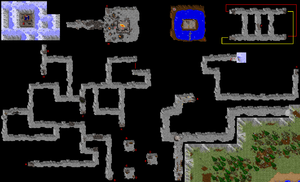 Map of Cave to Frozen Land 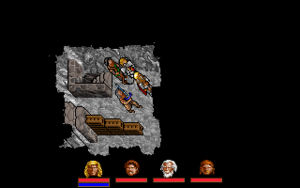 The Way to Roof.

Go to the Boulder in the Cave and then South. Destroy the Trap on the first Chest to get 2 Cloaks. In the other pickable Chest is an

Enchant Missiles Scroll. Go North from the Boulder to the Stairs below. There is some

Spider Silks around and also

Spiders. Go down and slay

Goblin on the way until you come to Crossing. Go East and destroy the Trap South. Go up the Stairs. Take 3

Cold Resist Potions along with the 3 Crates. Go up another Stairs. The 2 Crates have some Potions too. Take the 2 Crates and go up one more Stairs. The Crate here has

Magic Boots. With this Crate and the other you picked up you need to build a Crate-Ladder to the Stairs to the Roof. At the Roof is a Lich-Statue sitting on Thron and some Bones lying around which comes to Life if you come near it.

Go back to the Crossing and go North, but before going West you need to destroy more Traps to the West. Going South is the longer Way around it with some

Gazers while going West is the Shortcut. So go West then North until you find the Monolith. Don't bother with the Stairs south of Monolith. It only lead to 4 more Stairs which loop around. So take the left Path North. Go down either Stairs at the Ends. Go in the red Moongate which leads to a Tomb with some

Brown Tentacle. Get the Key on the Ground and read the Plaque. A Ghost will appear and drop a Note at your Foot. 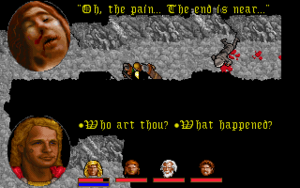 Fitch, the Trapper is dying.

The Ghost is apparently Gannt the Bard and he was killed by Captain Stokes and he want yo to take Revenge on him. The Key on the Ground will open the Door to his House in West of Fawn. Step on the Teleporter nortwest and you're back by the Moongate. Go back to the Monolith and take the right Path North. Go South and South again to the Stairs. The other Paths only leads to 2 Teleporter picked with Caltrops which are visible and some

Acid Slugs and the Teleporter are connected together.

This is the last Chance to wear yourself with warm Clothes, since once you go up the Stairs it will begin getting colder. At the end of the Cave lies Fitch a Trapper dying. He tell you of a evil Sorceress who slaughered Trapper and then he died. He have a set Warm Clothes if you need it. 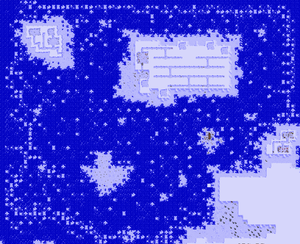 North of it is a small Cave in which some

Polar Bears live. Go North until you meet Bwundai wandering around, then go in Gwani Cave at (23N, 1E) to meet Yenani. In the other Cave at (21N, 9E) lives Myauri and the sick Neyobi. Baiyanda, Mwaerno and Bwundai is at (23N, 14E). The Bag in eastern Room has some Reagents. The Gwani People will tell you what happened with Gwenno and where her Corpse is. You need the Gwani Horn to visit Death Temple, but someone stole it and took it to Skullcrusher Mountain. Talk with Baiyanda and she want you to save Neyobi. You need to get Ice Dragon Blood from a Ice Dragon. She will give you an empty Bucket. Continue North to meet 2 Hunter (Kapyundi and Gilwoyai). They tell you more on Ice Dragon and also tell you to use the other Entrance to Ice Dragon Lair. 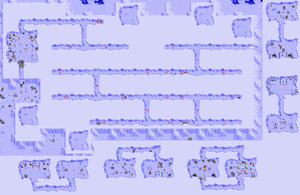 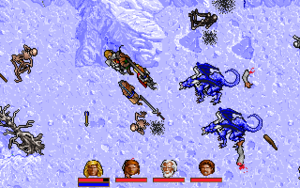 The Front Entrance is protected by 2 Ice Dragon.

Ice Dragon and in one of the Corpse around is a

Magic Leggings or we can also use the Back Entrance at (93N, 11E). Go West, South to a Crossing with a Corpse and

Poison Dagger lying around. Both Way have a Teleporter. The East Path send you to a Corridor east of a Corpse with

Spear lying around. The West Path send you to a West-Chamber with 27

Magicians Wand and go in another Chamber with a

Magic Bow and Moongate. It will take you back to the Corridor west of the Back Entrance. So we will take the East Path and go West to a Corpse with a

Detect Trap Scroll. Go North then East, but don't go far East. Stop when you see the Blue Chest and use the Key of Ice (from Shipwreck) on it to find a

Magic Axe. The Teleporter near it take you to another South-Chamber. The Corse there has

Cold Strike Scroll. The other Chamber south has Fire Wand,

Magic Helm. The Moongate will send you back to Corpse with Poison Dagger. This time take the Path West of Corpse with Detect Trap Scroll to the North-Chamber. The only noteworthy in it are the

Ice Trolls. The Moongate take you back to Corpse with Detect Trap Scroll.

Go North and West to get teleported in another Corridor. Go East and East again will just get you to South-Chamber where you already went so go South of the Crossing. Go East to East-Chamber. This Chamber have nothing of interest, but the other Chamber to the West have some Potions, 12

Magic Boots. The Moongate teleport you back to the Corridor before you went to East-Chamber. Now go west and you will find yourself in yet another Corridor with Two Handed Sword and Bear Skeleton to the West. Go near it and you will be in Middle-Chamber. The only Thing of Interest are the Monster and the

Magic Axe near the Moongate. You will then be back in Corridor with the Bear Skeleton.

Empty Bucket
If you forgot to take one, there is one in Dragon Chamber. You can also use it on 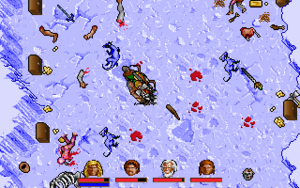 Ice Dragon Babies. There is 202

Gold Bars and a

Magic Axe. Going south leads you out of the Cave which are Protected by 2 Dragon or we can go back to the Corridor and take the Northeast Path to get out using the Back Entrance.

Hound of Doskar to track down Batlin, then Yenani will not give you the Password.

Go back to Yenani, using the Ice Raft, and give her the Bucket with Blood. She will thank you for healing Neyobi and tell you the Password for Temple of Chaos. At (2N, 2E) is the Entrance to Skullcrusher Mountains.

If you come to Monitor again to buy warm Clothes, you may as well visit Harnna to tell her Cantra died and were taken to the Monk Isle. If you say bye she will tell you another Prophecy that corner the Cold Lands.

The House of Captain Stokes is at (77S, 28E) and with the Key you found by the Tomb you can enter it. Inside is the Captain and a Computer. Click more than once on Computer to listen to advertising for Wing Commander, Ultima 8, Privateer. On Fourth Click the Computer will explode. Kill Captain Stokes for

Poison Dagger and also for Revenge of Gennt. The Chest upstairs is trapped and locked and have 28

At (44N, 11E) is another Gwani Cave where Gwani Hunters lives with some Reagents and 7

Sword of Defense to loot. Be sure to loot the Corpses beforhand before you enter the Ship, since upon entering the Corpses will come to Life and attack you. The 2 Chests are not pickable, so you need to destroy it to get the Treasure within. A Book tell of more Riches which are protected by a Ice Dragon. The Ship's Logbook will tell you what happened on the Ship. There is also a Key of Ice. 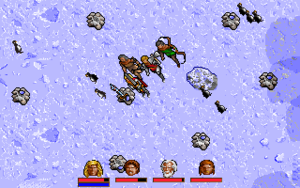 Magebane is on Penguin Isle.

Magebane Sword is, but once you pick it up the Penguins will attack you. You can also drop the

Blue Egg in its Place.