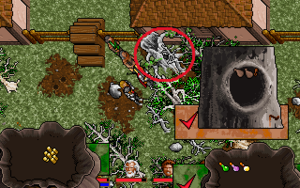 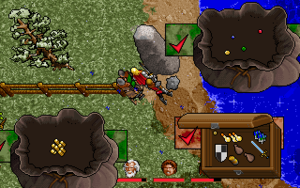 Monetari, 3 Potions. Go North at (100E, 39E) and you will see an invisible Chest on a Monolith. You need to build a crate-ladder to reach the Chest. It contain a 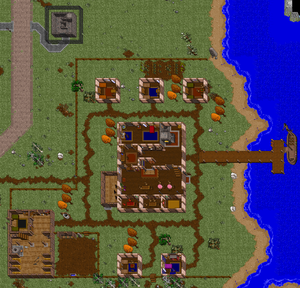 Map of Inn of the Sleeping Bull

There are many people staying at the Inn. Devra, the owner exchanges money (Gold and Gems too, except for Gold Bar). Argus is the Innkeeper and can tell you some of the guests or of Silverplate, the Pirate. Byrin is a Bard and his Songs contain some Hints about your Future. Kane, a shepherd tells you the story of his brother Edrin who transformed in a

Parrot by the Magic Storm. Then there is Ensorcio who can tell you a lot of Moonshade and other Mages. You can buy Spells from him later in Game when you get the

Spellbook. The Chest in the Backroom is locked and has 100

Guilders. We will get to the Guest-Rooms later. Miggim is in the Stable and is from Monk Isle and will warn you about a Danger. 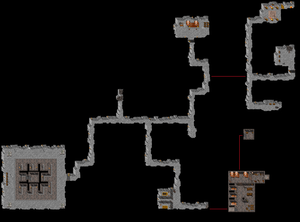 Map of Inn of the Sleeping Bull Basement

Go downstairs and click on the Wall between two wine-kegs. Pull the lever and get the key (which opens the Prison-Cell one floor below) off the left chest. Destroy the trap on the Right Chest to get 100

Monetari and 3 Bandages. Go back and go down another stairs. Open the Top Prison Cell with the new Key and read the Scroll from the corpse. It will give you hints about the Secret Entrance and Magic Wardrobe. Continue your way north until you come across a fork. Go left and open the Door with the Key. This is the Magic Wardrobe you heard about in the Scroll. Open the invisible Chest on the North-Wall. Its 75 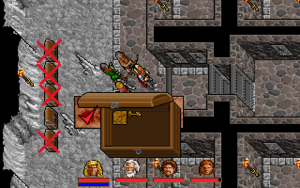 Which Chest to open?

Open only the 4th Chest from the Top at the West-Wall. All the other are Traps and will explode. Get the Map and Key from this Chest. Open the only locked Door in the Wardrobe with the Key from this Chest. Pull the left Lever. Pull the Lever in the now opened Room. You've activated the Magic Wardrobe. You can now teleport to the Guest-Room via the Lever. Room 7 have a locked Chest which contain Necklace of Bones, 2 Bandages and

Antique Armor. Room 6 have a Book that is from Batlin Companion.

Go back at the Fork and go East. The Wine Room at the End of the Road is not important so don't bother with it instead search for 2 Torches sitting together, then go East through the Wall. 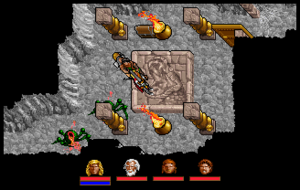 First go South. Its Poison-Trapped so watch out and there is

Corpser too. The Corpses have 15

Antique Armor and some stuff. The Chests also contain 60

Next is the East-Path. It leads to some Acid Slugs, 3 empty Chest and 2 Corpse with

The North-Path is last. You'll come across a Serpent Gate which are occupied by

Gazers and a locked Chest which has another Key (open the Door near the Teleporter), Dark Path Map and

Magic Scroll (Explosion). The Teleporter behind the Door lead you back to the Inn.

Talk with Flindo to find out the Pikemen captured Captain Hawk in the Tower North of Inn of the Sleeping Bull. Without Captain Hawk there is no passage to Moonshade so go to the Bull Tower at (99S, 28E) and talk with any Pikeman there. They demand at first a Ransom of 100

Monetari, so try to pay the fine, but they will just raise the ransom again and again. Break the talking and go back to the Inn and Selina will automatically talk to you.

She will tell you of the Mint Northeast from here which have Treasure and ask you to join her. Say yes and she want to go only with you, so say no to go with the entire Team. She then join your Party and will give you a key. Loot her, especially the Key (which is used in Shrine of Order later ingame) and

Magic Scroll (Columna's Intuiton), but the Blink Ring can't be taken yet (Its dont matter if you missed these 2 Items, you can grab it from her later in game).

Ghost-Bug
If you talk to the Ghosts inside you may screw the Game up, because you are supposed to talk to them later im game and only with the necessary Spell, which you don't have. Luckily this is fixed in the Exult Mod "SI Fixes".

Go North along the Coast until you spot a brown House at (71S, 52E), but you may enter, but don't talk to the Ghosts inside! There are some Potions which you can take. In the Basement the Skeletons will come to Life and attack you. There are some Reagens and

Gems lying around and on the second level, there are some 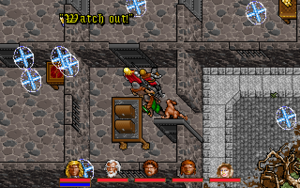 Continue East until you found the Mint at (76S, 81E). Use the Key you got from Selina and enter it. You will teleported around and Monster will appear infinite, so just pick all Chests and grab all Treasure (Lots of

Gold Bar) and go out of here.

On your Way back to the Inn you will get ambushed by a group of Bandits and Selina will teleport away. Now you know why Selina wanted to go alone with you. One of the Bandits carry a

Sword of Defense, so you may want to get it and another one carry a Scroll which tell you who commanded the Ambush: Batlin!

Go back to the Bull Tower and drop all

Gold Bars but one on the Ground and offer 1

Gold Bar to the Pikemen to pay the fine. They accept it and will give you a key. Go in Basement and open the Prison Cell of Captain Hawk. He tell you that he will meet you at the Inn. You can now do the Goblin Passages next or skip that and go to Moonshade.

There is a Sheep Pen at (132S, 38E) with 2 Teleporter which leads to Shrine of Chaos. There is nothing important there so leave it alone.

Plate Leggings which might be useful at the begin of the Game.

Swamp Boots and want to trade with you for the

Slippers. With that one Lost Item is recovered.