You need the Password from Yenani, a Gwani, before you can enter the Skullcrusher Mountains. 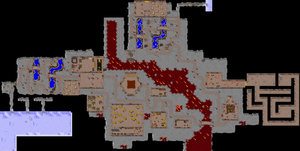 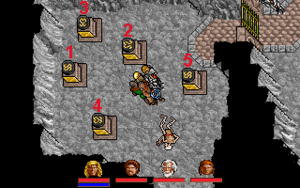 Solution to the Entrance Puzzle.

Upon entering at (2N, 2E) you will find 5 Pedestal and and some Rune is on it and some is lying around. Check the Plaque to check which Rune belongs to which Pedestal (for once the Translation Spell is not useful). In the Corpse is a Scroll in Serpent Language, so cast Translation Spell and read it. Start clicking on Rune (I) on westmost Pedestal, then (S) Middle Pedestal, (I) topmost Pedestal, (G) South Pedestal and lastly (I) the eastmost Pedestal. If you are doing it right, then the Avatar will say the Password and the Gate will open. 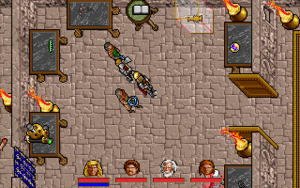 Go East into a House. Go North in a sort of a Museum. Read the Book to see what Vasculio stole from the Mages in Moonshade. Drop the

Black Sword on Ground and click on Flux Analyzer to restore the Power of the Black Sword. You should also take

Philanderer's Friend with you. It will be necessary later on. The

Gwani Horn is in a Energy Field and you don't have the Dispell Field Spell yet, so remember it when you come back later.

Go in Prison and a

Skeleton will ask to aid him, so unlock the Door with Magic and as thank he will attack you. Slay him and check the Corpse in Cell. It has 2

Serpent Tooth will lead you to Great Northern Forest and Fawn. The Book tell you of the Destiny of the Corpse names Maleccio. Now read the Scroll in Coffin-Room. There are 4 possiblity in dealing with Vasculio, depending if you have the

Magebane Sword or not: 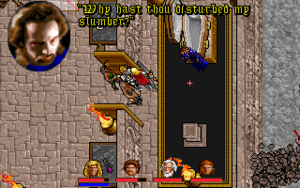 Gwani unlike the friendly Gwani outside, so you can slay them. Go South of Vasculio's House.

The Ghost there is not evil and will drop a Book to the Ground. The Book is a Hint to where to find Magebane Sword. There is also a

Translation Scoll in Library. West of Vasculio's House is a Theather with 4 friendly Ghosts. In the Restaurant is also a friendly Ghost. East of the Theather is Vasculio's Lab. The Book there tell of Vasculio's Experiments. South of it is the Warehouse, but all Chests, Crates and Barrels are empty, but in Southwest Corner is a hidden

Powder Keg. East of the Warehouse is the Armory. In the locked Chests are also mass of

Gold Door
You can only enter the Rooms behind the Door through Cheat. There is only some Corpse of which only one have a Diary. There is nothing useful in there and the Stairs also leads to nowhere.

Go East over the Bridge to the House you see. It has 3

Powder Kegs. Go North in the next Building. There is a Scroll on Pedestal and some Fire Pillars and 2 Automatons guarding a massive Gold Double Door which cannot be destroyed, not even with Powder Keg. Going North to find one more

Powder keg under the Debris. Continue North and check the Corpse Pile near the Bridge for a

Magic Gauntlets. In Northwest is the Serpent Gate and another massive Gold Door. Rembember it as you will come back later in Game and you need a

Powder Keg to destroy it (There are plenty Powder Kegs to find in this Mountain). Go East to a small Door. Unlock it with Key from Vasculio. You are now out of Skullcrasher.

Mass Cure Scroll and look into Moon's Eye to see what Batlin is planning. At (39N, 96E) is the Entrance to Spinebreaker Mountains where Batlin wait for you.

At (46N, 69E) is a Ruins with a Chest which is trapped and there is another Trap near it. In Chest is a

At (28N, 115E) is a Cave. Before the Stairs is a row of Poison Field Trap. Go down and fight some Monsters and get the

Juggernaut Hammer on the Altar.

At (67N, 123E) is a Cave which is apparently a Deadend, but it has a Secret Path to the East. It leads into the City of Order and is a Shortcut. 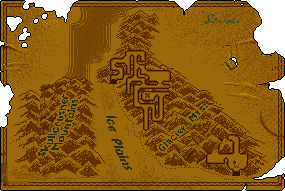 The Map show you where the Entrance is and which Path to take to the Treasure.

At (50N, 40E) is a Hidden Entrance to Silverpate Treasure. Check the Map you found in Underground Cave of Inn of the Sleeping Bull to see which Path must be taken. There are some Traps here so watch out. At the X Point is 6 locked Chests which contain:

Gold Bar and normal Weapons and Armor. There is also

Blackrock Balance Serpent and read the Book to know Silverpate had problem with Erstam.

Wand is in Vasculio's Lab lying on the Tab. You can drop

Alchemist Apparatus in its place. The

Wand is not powerful as it were in Black Gate. It only make People sneeze when used.