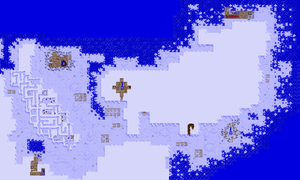 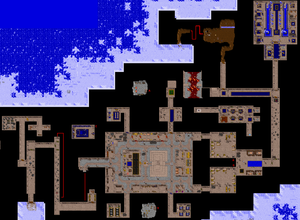 Automaton, Batlin is speaking through him to you, and will attack you. Take the Key of it and also from 3 other Automatons Corpse. Unlock the left Door and go North. Beware there is a Poison Field Trap there. Unlock another Door and check the Crates for Reagents. Go back to the first Door and go right and talk with the

Automaton behind the Gate. He will ask for a Password, but there is no way for you to know it, so you must find another way into it. Cast Telekinesis on the Button and the Gate will open. Upon entering through the Gate, the

Automaton will attack you and he have another Key. 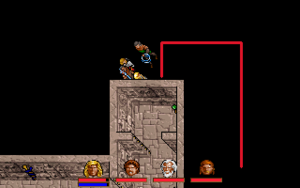 Another Path to avoid the Trapped Path. 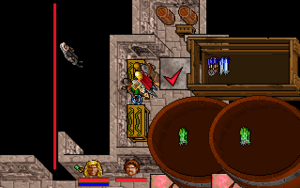 This Trapper tell you of another secret Path

Try to push the South Button and

Brunt will come to you and tell you to follow him to stop Batlin together. Don't listen to him. The Path to the South is fully trapped, so instead push the North Button and walk in North Wall to follow a secret Path to the South avoiding the Trapped Path. The Corpse on the trapped Path has 23

Magic Arrows. Go South and East, where the Earth will quake and Dupre tell you to make haste to reach Batlin. Unlock another Door at the End and get 15

Burst Arrows from the Crates and Barrel. You will see a

Trapper in a Secret Path, so click on the Wall South of it and go through the Path while dispatch of the

Earthquake
There will be Earthquake in the City, but don't worry about it. All it does is shaking the Screen and nothing more.

You are now in City of Order, since the Order won the War, the City is not destroyed unlike the City of Chaos. Go South and go up the Stairs. Read the Scroll on the Desk to learning what the Avatar must do. Get 5

Lockpicks in Desk and go North to enter the Shrine of Discipline. Get the

Filari from the Corpse and the

Serpent Dagger from the Pedestal. Go back and go East pick up any Potions and Bandages. Also read the Scroll to know which 3 Artifacts you must take. Go East and go down the Stairs to pick up 14 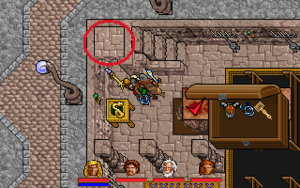 Go back and go South through the Kitchen with some

Rats, then pass the Winepress to the Left and go South to reach the Shrine of Logic. It has some

Spider Silks. Pick up the

Abacus on the Pedestal. Go back and go West, then South to reach the Shrine of Ethicality. You need only one Scroll and it don't matter which one you will pick. Go to the Pedestal which is West of the Kitchen. Read the Book and the Plaque. Place the Scroll on the Pedestal to see the Text on the Plaque has changed. Now place the Serpent Dagger on the Pedestal and lastly place the Abacus on Pedestal. You can now enter the Temple of the Hierophant. The Wall behind the Lantern in North is a secret Wall and behind it is a locked Chest with

Go downstairs and an Automaton will greet you and mistake you for the Hierophant. Lie to him that you truly are the Hierophant to receive the

Serpent Sceptre. He will then break down and die. The Drawer and Nighstand have

Gems for you. Go back up and put the

Serpent Sceptre on the Blue Pedestal. You will then get teleported to the Library.

Book
By reading the Book you can now give the proper Answer to the Quiz asked by the Automaton. 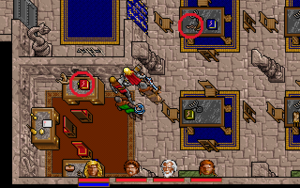 These Keys are needed to return back to City of Order.

Take the Brown Key on the Table and Yellow Key hidden under the Red Book on the Desk. Unlock the West Door with it. Read the Book "The Structure of Order" and go enter one of 2 Teleporter to be back in City of Order. Go East from the Winepress and press the Button on the Wall.

Palos will come and insult you and vanish again. There is 2

Jewelry in the Room Right, but in the Big Room ahead are some nasty Traps. So detect them and destroy it before going past the Stairs to East where the Automaton guard the Gate that leads to Batlin. He will ask you Quiz and the Answer is The Structure of Order. Push the Button and

Deadeye will appear and taunt you and disappear again.

The Path to the North is trapped, but if you stay close to the Wall, you will be fine. Alternate you can also destroy the Traps on the Middle Way. The Corpse have a Key for the Vault of the Dead in the City and the Door before you is locked, but if you stole the Key from Selina at the Inn of the Sleeping Bull, then you can just unlock it and continue on.

Otherwise go back in the City. Go North of the Serpent Gate and unlock the Door with the Key of the dead Pirate. Click the Button on the Carpet to lift the Carpet up. Go East, down the Stairs and North. In the Cave are some Monster and 23 Serpent Arrows. The 2 Chests behind the Firewall are trapped and locked. The Left Chest have 3

Brass Shields and a

Lighting Whip and the Right Chest have

Create Automaton Scroll. If you didn't buy the Create Ammo Spell, then transcribe the Create Ammo in your Spellbook. On the West Wall is a secret Path that lead you Outside. 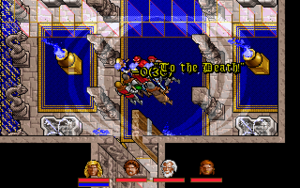 Big Fight before you meet Batlin.

Go back and go East and open the Door. Go North and open another Door, but beware: Behind this Door await

Brunt. Selina will then turn the 3 other into Cyclops. Slay the Cyclops first before you can kill Selina. Be sure to transcribe the

Dispell Field Scroll in your Spellbook you found in Selina's Body. With the Death of Selina the Energy Fields will also disappear.

Jawbone with 6 Serpent Tooth (City of Chaos, City of Order, Temple of Discipline, Inn of Sleeping Bull, Temple of Enthusiasm and Temple of Logic) and the Key. The Blackrock don't match the Slot on the Ground, so no wonder Batlin failed to open the Wall of Lights.

In West Rooms are 2 Keys,

Create Automaton Scroll and some Potions. In the East Rooms are

Powder Kegs. The Great Earth Serpent tell you to get the Gwani Horn in Skullcrusher Mountains.