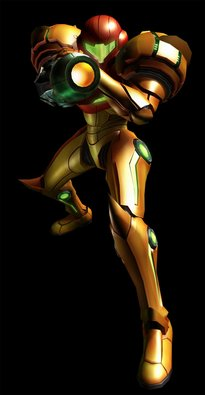 Considered by many to be the most well-balanced character in the game. Her affinity weapon is the missile launcher. When charged up, the missile launcher is more powerful and can home in on enemies to a point, but not like Kanden's volt driver. Her alt-form is the Morph Ball. The Morph Ball is fast, small, and can leave up to three bombs. She is not the character with the most outright firepower, but she is very well balanced and is a good pick for those who are new to the game. 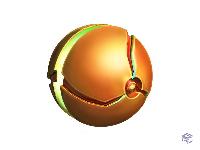 Samus may transform into a small rolling ball with the capacity to lay bombs. Three bombs may be laid at any one time by pressing the left shoulder button

, but do take a brief time to recharge if all 3 are deployed. The bombs detonate after around 2 seconds or ignite on impact with an unfortunate Hunter. The Morph Ball will roll downhill, even when frozen, so it is not advisable to leave it on a slope. By holding and releasing

or stroking the screen with the touch pen quickly, the Morph Ball will boost. The boost causes 20 damage to anyone Samus hits. Do not boost into a Vhoscythe with it's blade out as you will do no damage, instead being repelled taking 48 damage. The boost can be used to change direction quickly: While holding Up stroke down quickly on the touch screen to reverse direction without loss of speed. This is also one of the few that can use their own bombs to jump in the air. With bomb jumping, the Alt. Form can go high distances, the max amount you can do is 2 Jumps (double bomb jump). Leave a bomb, wait 2 seconds, lay another, than when you launch up, lay another bomb. Executed right, you will jump up from the second bomb,into the third bomb, propelling you twice as high. It is also notable that the Morph Ball is one of the faster alt-forms, if not the fastest (when taking into account boost), ideal for chasing dawdling Dialanches or fleeing even lightning Lockjaws; coupled with her bombs, this makes the Morph Ball a very well-rounded alt-form, like Samus herself.