You start out in the bottom of a rectangular map, similar to "The New Dominion" but larger in size. The Protoss Temple (the location of which is given to you from the beginning) is on the opposite side of the map, but you don't actually have to fight through all of your way there; once you've destroyed the Protoss that are near your base, it's all empty land until you start getting close to the Temple.

Note your large starting supply of minerals. In addition, you have so much minerals in your large starting area that you could build enough Zerglings to fill the 200 supply limit five times over. The limiting factor is gas; you only get one geyser, and that won't even be close to enough. Therefore, your focus at this stage of the scenario is to secure more gas locations while building up your defenses and climbing the tech tree.

Scout out the general surroundings of your base with Overlords while gathering the resources next to the Hatchery. You'll find a sizeable mineral field to the left and another one to the right; also, there are stray minerals near the cliff to the right side, but you can't mine those until the Protoss defenses on the cliff are taken out. As the minerals start coming in, build two more Hatcheries, each near the two mineral fields. Not only will this help you gain resources much faster, it will also come in handy for the mass-production you'll be doing later. 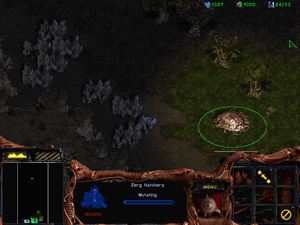 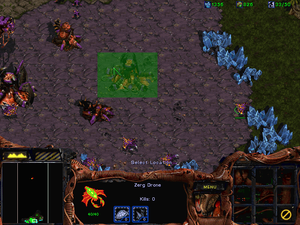 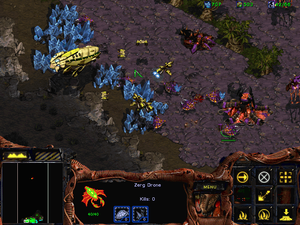 And make sure to defend them from attacks like this.

Since what little gas you have must go primarily towards building attack units, Sunken and Spore Colonies will have to handle the defense. Fortunately, these only cost you minerals, and it's not like you'll run out of those anytime soon. The Protoss do attack in fairly large waves (expect Carriers and Reavers from the very beginning), so you need a dense defense network. By the end of the mission, you should have about 50 Colonies defending your base(s); again, you need this many because you need to save the units for attacking. When building static defense, make sure the Colonies are in positions to defend each other—for example, don't build three Sunken Colonies in a location where they can't be covered from air units by Spore Colonies, and try to ensure that any enemy attacking one of your Colonies is fought back by both the one under attack and at least two additional Colonies.

Luckily, the yellow Protoss will usually only attack you with air units, namely Scouts and Carriers. This should make your defense network easier; once you take out the teal bases on the east and the west, you will only need to worry about Spore Colonies. Any ground attacks can be dealt with your existing units. Build them all around your base and any expansions you secured. 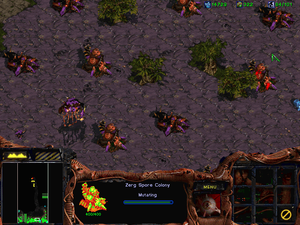 All this is only a part of the defenses you'll need.

Clearing the lower half of the map[edit]

Two Protoss bases lie to each side of your base, and this is where most early attacks originate from. Whacking them will give you a significant amount of breathing room. But more importantly, they have gas geysers! Even if they're depleted, that's still more than what you would be otherwise getting. 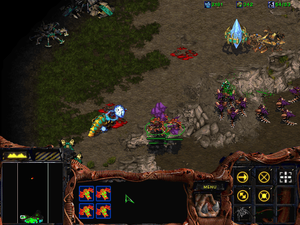 The hardest part of these assaults is climbing the ramp.

Build a force of 24 Zerglings, 12 Hydralisks, and 4 Guardians (Mutalisks are also handy but not necessary). If your Ultralisk survived up to this point, throw him in too. Make sure to upgrade Adrenal Glands for your Zerglings before attacking. It doesn't really matter which base you attack first, but the left side is slightly closer so you should probably go for that one. Lead with the Guardians, destroying everything in sight range (focus on any Reavers you see); Hydralisks should follow closely, ready to destroy enemy air units. When the area around the ramp up to their base is clear of Photon Cannons and units, move in the Zerglings and raze the structures. When the base is gone (and this includes the small area north of the ramp, containing a Templar Archives and some defenses), quickly bring in Drones to morph into a Hatchery and Extractor. Enemy Scouts and Carriers like to harass this location, so be ready with a matrix of Spore and Sunken Colonies. 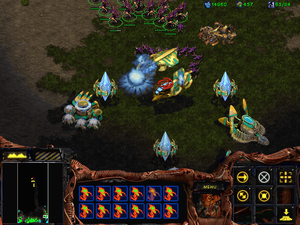 Take out the Stargate to reduce the Protoss's unit-producing capability.

After sufficient defenses have been set up here, move the same attack force over to the east and repeat the strategy. This base has a Stargate and some Scouts, so bring some Mutalisks to take fire for the Guardians. Otherwise, this one should be easier to attack than the last because there won't be any Reavers.

When you have destroyed both bases and set up your own, you just increased your gas income significantly and cut the Protoss's unit-producing capability even more significantly. 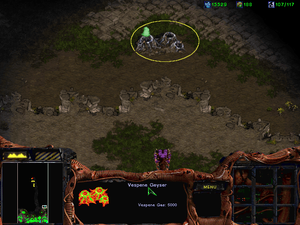 Here's what you should do immediately after setting up adequate static defense in the eastern outpost; take your attack force and move it to a location directly north of that outpost (it's not on the same plateau so the ground units have to move down the ramp). You'll find a full Vespene geyser with 5000 gas in it. You could have colonized this location earlier, but it wouldn't have been very viable because of its proximity to the Protoss base. Scout with an Overlord or refer to the screenshots if you can't find it; once you have, build up the static defense like in your other bases. 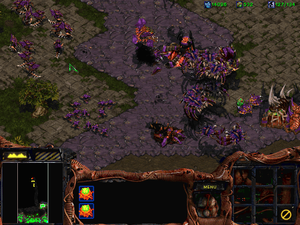 Now you have six(!) Hatcheries. Use those and the ridiculous amount of resources you should have accumulated by now to build an assault force consisting of two full groups of Zerglings, a full group each of Hydralisks, Mutalisks, and Guardians, 4 Ultralisks, and a handful of Scourge.

Stage your units near your sixth Hatchery and begin the assault. As mentioned earlier, you won't encounter much resistance in the jungle; you only start coming up against patrolling Dragoons at about the midpoint of the map, and a bit further up from there you'll finally find a sizeable base. As always, use Guardians for most of the dirty work, with your melee units (Zerglings and Ultralisks) helping take down buildings and everyone else providing support. 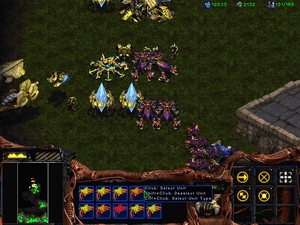 Send in the Ultralisks first to soak up damage.

This Protoss base is actually pretty large, sprawling across the entire top part of the map, but you don't have to kill everything; remember, your objective is simply to destroy the Temple. Cut a straight swath through the enemy base, reducing Photon Cannons to rubble as you go; at the Temple itself, you'll come across a fully loaded Carrier and some Archons and High Templar. Throw all your Scourge at the Carrier to take it out quickly, and since Archons absolutely murder most Zerg units with their powerful splash damage, have the Ultralisks soak up the attacks while the Guardians hurl explosive gobs at them. Meanwhile, the Zerglings should focus on taking out the Temple quickly. 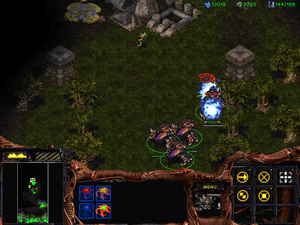 Take care of these Archons before you send in the weaker units.

When the Temple is gone, you'll get a Drone carrying the piece of Khaydarin Crystal you mined in the last mission. Bring it to the temple site and put it on the Beacon, taking care not to get it killed by traveling across unexplored territory.

Be careful not to take your units any further north, unless you are very adventurous. There is also a red base at the top of the map, and their AI will begin as soon as you destroy the Temple or kill any of their units. Notice how they have never attacked your base. It is best to leave them alone and not have them get involved in this mission.

Cinematic #8
The Invasion of Aiur

Millions of Zerg roam the desolated parts of Aiur, while thousands of Mutalisks and Guardians converge on the sacred Xel'Naga temple site to witness the manifestation of the Overmind. Sure makes you wish you could wield that kind of power in the game, no?

Mineral Rush. Taking those gas geysers from the Protoss can be headache-inducing. If you'd rather risk a mineral-only army than build a balanced one, build a large swarm of Adrenal Glands- and speed-upgraded Zerglings to rush the Temple's location before the Protoss know what's happening. This should number at least 48 of them, and the more the better. You won't be able to attack air units, and Archons will brutally murder many Zerglings, but with that many of them you should be able to destroy the Temple before all of them bite it. Bypass all defenses in your way, and ignore anyone that attacks you; just continually pound at the Temple until it's down.

With this strategy, though, bringing in the Drone becomes tricky. Build an additional 24 or so Zerglings, and use them to draw fire away from the Drone as it scuttles its way to the Beacon. This is heavily reliant on luck, as the enemy sometimes focus fires on the Drone and completely ignore it at other times... it will be wise to save your game.

As a slight variation on the above, try building 200-260 Zerglings, using base defenses and the occasional batch of Hydralisks to defend your base until they've been completed. The advantage of doing it this way is that you can actually send the Zerglings in to attack, and they will devastate all the defenses in the way fairly easily. When it comes time to transport the Drone, send all your Overlords as decoys, with only one of them actually holding the Drone; drop the Drone if its survival becomes questionable.