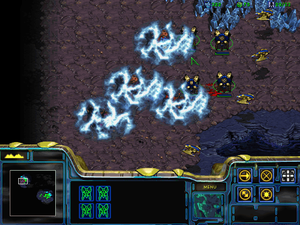 The AI will automatically cast Disruption Webs in the correct spots, so all you have to worry about is keeping those Dragoons alive.

The mission starts with a scripted sequence as a wing of Corsairs casts Disruption Web above the Zerg Colonies in the top-left corner, clearing the way for Shuttles to deliver a team of Dragoons. Use the Dragoons to kill the Hydralisks, then attack the Sunken Colonies. The Disruption Webs will wear off before you're done, so get your Corsairs out of range of the Spore Colonies. Once this area is clear, make preparations to expand here eventually.

Disruption Web and Mission Difficulty
You might be wondering why the developers made this opening sequence so tough, with the player being given barely enough units to survive against the Sunken Colonies. This is actually due to a patch in ability statistics: in the original 1998 release of Brood War, the Disruption Web ability lasted for 40 seconds, which was more than enough time for those Dragoons to kill everything. However, the 1.08 patch in 2001 reduced the duration to 20 seconds for multiplayer balancing, and since this singleplayer mission was not altered accordingly, the sequence became much more difficult than intended. 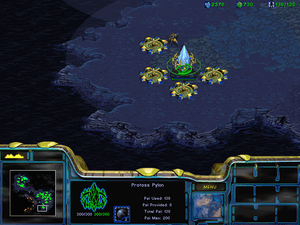 A few Cannons here will prevent annoying Overlord drops to this spot.

Now you need to make your base secure. The enemy will make regular Overlord drops on your island, all along the coast; first in single drops, then in waves with Mutalisk air support. Station your Corsairs and Dragoons where they were dropped, to discourage this. Remember to order your Corsairs to "Hold Position", or they'll chase off the first unit they see, even straight into the Zerg base! While you continue to build Dragoons and send them to the eventual new base, start building Pylons and Photon Cannons along the coast near your base to secure it. Build a few in position to guard the bridge in case the Zerg land in the top-left. This will be expensive, but still much cheaper than rebuilding your base. Once a network of at least six or so Cannons in each direction is complete, Zerg drops will cease to be an issue.

Now it's time to build your army. You'll need Reavers to lead the charge, Shuttles to make a landing (if you haven't noticed yet, the Zerg Cerebrates and the Temple are both on an island), Corsairs to clear the landing zone and provide air cover, and Dark Templar to make the kill. Gather resources diligently, since you can build another base to the northwest. Focus on minerals, since Reavers with their Scarabs tend to be expensive. A force of two Reavers, six Dark Templar, four Zealots, and twelve Corsairs is a good mix. You'll only need a handful of Disruption Webs, but you should still attempt to have a large number of Corsairs to deal with air units (since you will not be taking Dragoons to the island). 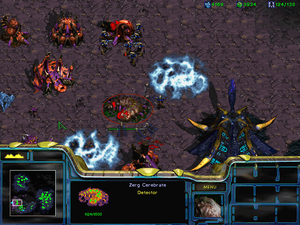 The Cerebrates are located to either side of the Xel'Naga Temple. Use Web liberally to save your troops from getting perforated by Sunken Colonies.

Save your game before you attack, just in case it turns out you need a bigger army. You will be repeating the stunt from the opening; use Corsairs to disable the Spore Colonies, and then rush your Shuttles in to drop. The battle will become absolute bedlam as all the burrowed Zerg come out of the woodwork, but don't get bogged down. Keep moving your Reavers forward, toward the Cerebrates. A key goal is to clear out Sunken Colonies, as those will tear up your Dark Templar in a hurry, and their Cloak ability won't help with so many Overlords around (however, as your Corsairs will continually be hunting these Overlords, by the time you get to the Cerebrate there may well be none left). Keep having the Reavers attack structures, and order your Templar to stay close to them to kill Zerglings and Hydralisks. If your Templar wander off to attack random buildings, they'll be killed easily. Once the Sunkens are swept away, rush your Templar in to kill the Cerebrates. Watch the ending sequence to complete the scenario.