You start in the southern end of a rectangular map, with a sprawling Terran base in an elevated ridge that spans the entire western and northern sides of the map. The Chrysalis is located in the western end of your starting base, which means it's not very well defended. Immediately start building your economy, until you have 12 Drones on minerals and four on gas; as you're doing this, make Hydralisks and station them near the Chrysalis, and plunk down at least two Sunken Colonies to that side of the base. 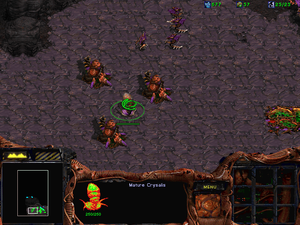 The Chrysalis actually gets some hit points in this mission. It is also defended by these three Spore Colonies, which will do squat when it's attacked.

The Terrans will attack you periodically, with infantry at first. Firebat groups can get problematic for the Hydralisks, but with the Sunkens covering their back they should be able to hold your own. Also, feel free to use the four Mutalisks you start with to help them (but make sure not to lose any). Their attacks will eventually include Vultures, which shouldn't be a huge problem either, but if you sit in your base too long without making a strike (this will be discussed in detail a bit later), groups of Siege Tanks will come and start blowing up your buildings and ground units... which means you should get busy assembling a strike force.

The said strike force should consist solely of Mutalisks. That's right: no ground units at all. The reason is that the Terran base is elevated, accessible only by a ramp, and defended by a very large number of Siege Tanks. Trying to airdrop units via Overlords will probably fail as well, since the base perimeter is defended by Missile Turrets and Marines that will shred the Overlords. So a mass Mutalisk attack is the way to go: to make that many Mutalisks, though, you need to harvest resources faster than you can with one base. 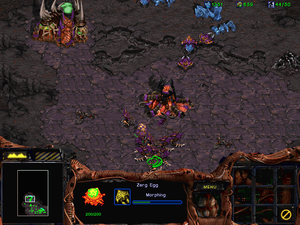 This is the area you should capture. Refer to the minimap here for the location.

First tech up until you have a Spire (this requires your Hatchery to become a Lair), and start cranking out Mutalisks as well as Hydralisks. When you have 12 Hydralisks and 6 Mutalisks, capture the elevated area directly north of your base. It will be lightly defended by a few Marines and maybe a Vulture; once they're dead, build a Hatchery and Extractor and starting harvesting those resources with more Drones (a bit of advice here: to increase efficiency, rather than waiting for Drones to hatch and building structures with them, have an existing Drone morph into that structure and have the newly hatched one do whatever the old one was doing). 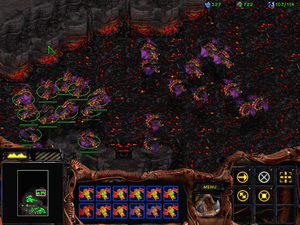 A force at least this size is required to make a strike.

Now build up your attack force. You need 24 Mutalisks, preferably up to level 2 in both attack and carapace upgrades (so build a second Spire and have the two research different upgrades at once). Maintain a defense force of 12 Hydralisks, and a few more Sunken Colonies to strengthen ground defense. Also, make a couple Zerglings and use them as scouts to warn you of incoming attacks. 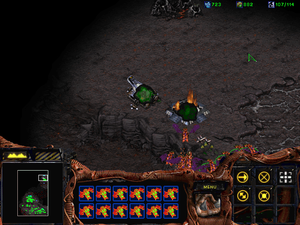 Start your attack in this corner, against this Bunker.

When you're ready, have the Mutalisks (hotkeyed into 2 groups of 12) fly to the top right corner of the map. This is where the Terran defense is weakest, and will spare your Mutalisks the trouble of having to face Turrets early on. Have them attack the Bunker and any units guarding the Starport, and while they do that hotkey your Hatchery and Lair to 9 and 0 and set their rally point to where the Mutalisks are at the moment (click the Set Rally Point command and click again where you want the point to be). With this setup, you can keep making Mutalisks (and yes, this will be significantly easier with more than 24 of them) and have them fly automatically to this spot. 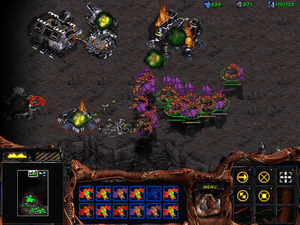 Things may start to get chaotic from here. First take out the Barracks and Bunker here... 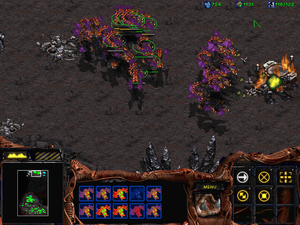 Then go back for the Starport (note that the group shown has been reinforced to 36 Mutalisks). 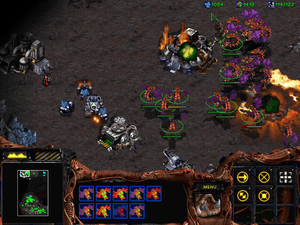 Here be their resource gathering center.

When everyone around the Starport is dead, ignore the building itself for now and move west. There will be a Barracks and some Marines here. Kill the Marines, then take out that Barracks; otherwise, it will keep making Marines to harass you. Then you can go back and wipe out the Starport plus any other Terran building in your way. 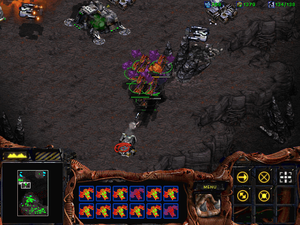 Keep making your way across the Terran base, destroying everything and reinforcing your force with fresh Mutalisk groups. You will come across a Factory, Command Center (with SCVs), and eventually a lot of Supply Depots and Siege Tanks defended by Missile Turrets. Even the Turrets cause no significant threat to you anymore, as you should have 24 to 36 Mutalisks by now and a single volley from a group that size will reduce them to rubble. If you run out of resources at any point in this mission (you shouldn't, though), there's a sizeable deposit of both minerals and gas in the corner where the Bunker and Starport used to be. 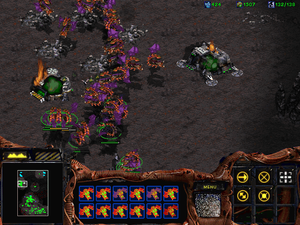 You need to destroy about this much before Duke gives up.

When you've got most of their forces, Duke will order a retreat and you will be ordered not to pursue. Another victory for the Swarm.

The Zerg are mobilizing—the Swarm awaits the hatching of the Chrysalis. But just whose "dream" is this?