They are as follows:

Protoss units are unique from the other species in that they have shields that regenerate as well as health, which does not. Shields take full damage.

Units are listed on the order that they become available. 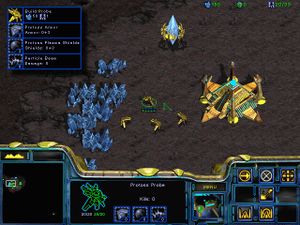 Probes are used to harvest resources in the early part of the game.

A small robotic worker that mines minerals and harvests gas for Protoss created at Nexus. Doesn't trigger spider mines. Costs 50 minerals. The probe has a projectile attack, and is used behind zeals for one hit kills on lings. The probe is the most efficient worker: It can leave buildings to warp in by themselves, so it can mine later. You can do this without management by having the building warp in, then holding shift, and right clicking on a mineral patch or Assimilator. 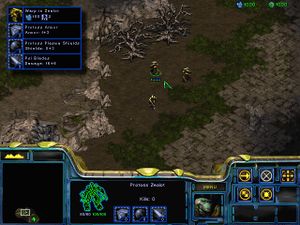 A ground unit, a Zealot channels his enormous psychic powers into creating a plasma shield and energy blades for offensive and defensive purposes. The Zealot is excellent at hand-to-hand combat, and can take a lot of pounding. They can't attack air targets though. The zealot is the most powerful first unit, but it is extremely hard to keep up a supply of them in early game. They are best paired with shield batteries and photon cannons to keep the zerglings away. 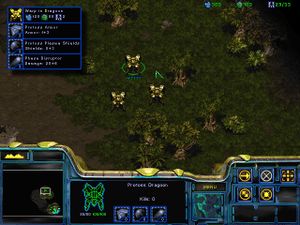 A Zealot, after being killed or mortally wounded, can be placed inside a robotic exoskeleton, and becomes a Dragoon. (This doesn't happen in game, rather a player warps in dragoons from a gateway.) The Dragoon's weapon is a Phase Disruptor, similar to the Phase Disruptor Cannon of the Protoss Arbiter. Dragoons are large but move fairly quickly. The dragoon deals 20 explosive damage, meaning only 10 damage against smaller units such as Zerglings. However, in numbers, the Dragoon is extremely effective, especially against medium and large units like Goliaths, Hydralisks, Reavers, and Siege Tanks. Even one or two Carriers or Battlecruisers will fall quickly to a large group of Dragoons. For smaller units, however, Zealots are generally better. If used together in numbers, the two can be a deadly combination. Dragoons, unlike Zealots, are not affected by a Dark Archon's Maelstrom spell. (This means that the player can use this ability to disable the opponent's melee forces without affecting his Dragoons. The units frozen by Maelstrom are unable to attack, and also form a protective wall that shields the Dragoons from other melee attackers.) Dragoons can receive a attack range upgrade (Singularity Charge) from the Cybernetics Core.

Spell-caster: doesn't attack directly, but can use the powerful spell Psionic Storm, as well as hallucinations. 2 can be merged into an Archon. The psionic storm is referred to as the most powerful ability in the game. The psionic storm causes 112 damage to all units (including yours) over the period of 4 seconds. Needless to say, the psionic storm is best used against masses of zerglings or possibly the enemy worker line. Psi storm uses 75 energy- three casts with full energy. While psi storm isn't effective against all units - 112 is not enough to kill a lurker, tank, or even a dark templar or a zealot in one cast - it is still very effective against large amounts of weaker units, like workers, zerglings, hydralisks, any Terran infantry unit, or units with low health.

A High Templar is a powerful Protoss psychic in the fictional StarCraft universe. High Templar can be warped in by a Gateway. High Templar initially cannot cast any spells, but are able to use the Archon Meld skill. Summoning High Templar requires the structure Templar Archives, where they can be upgraded to become able to cast Psionic Storm and Hallucination. The High Templar provide major targets for the Dark Archon Mind Control and Feedback abilities.

Hallucination (hotkey L) creates two duplicates of the target unit which do no damage and have no special abilities.

Archon Meld is the only way of obtaining an Archon. Requires selecting two High Templar.

The Archon is a psionic entity created via Archon Meld using two High Templar. It is a hovering (does not activate spider mines) melee attack unit against both ground and air based enemies. It possesses 350 shields and 10 life points. Its main attack has a fast attack rate and deals 30 points of damage, making it the third strongest Protoss unit in the game, after Reavers and Dark Templar. Archons can be extremely effective when used in numbers, so if you have a fair amount of minerals and an excess of vespene gas, consider making a number of them.

If you click on a Archon enough and it will say "power overwhelming", a StarCraft cheat code.

As its name implies, the Shuttle ferries other units by air around the map. It has no real other purpose. A shuttle has 8 "slots", explained below-

Shuttles are the Protoss' "drop" unit, allowing for drop tactics like the Reaver drop and the Templar Drop.

The Protoss equivalent of a Siege Tank, the Reaver shoots robots called Scarabs which race across the field and explode, dealing a large area of splash damage. Scarabs have a highly advanced tracking system, and are able to navigate around base defenses and friendly units to reach their targets, although at times they get stuck on these, and they also find difficulty navigating around cliffs and other similar environmental obstacles. Reavers are extremely useful against large amounts of weaker enemies; a small group of Reavers situated behind a group of Dragoons or Zealots can make short work of entire armies of Zerglings, Hydralisks, or Terran infantry. Reavers are also the Protoss' "siege" unit, able to attack base defenses from beyond their range. Downside: They move excruciatingly slowly and can't attack air targets, and also require each scarab to be purchased for 15 minerals and a short build time of 7 seconds.

The Observer is a permanently cloaked air unit which can move around and spy on the map. Has no attack. With their Detection ability, observers are Protoss's defense against cloaked units. These are also useful for putting in unclaimed resource areas or other strategic areas (Mountain passes, lookout point, enemy perimeters) to keep tabs on the board. If your opponent doesn't have many detectors, an observer in the enemy base can be valuable, as you will be able to observe (no pun intended) the tech tree being followed and the type of units being built, allowing you to use appropriate counters.

A light aircraft, the Scout has twin guns under its wings and a pair of missile launchers. Mostly useful against heavy air units. While individually the Scout is not effective against ground units, they do a good amount of damage to them when used in numbers, which makes them good against units that don't have an air attack. The biggest and most debilitating downside of the Scout is its extreme cost; two scouts cost more than one Carrier in the total amount of resources needed. This considerably limits its effectiveness as a mass attack unit. In general, the Corsair is better against air units, due to its low cost, but the scout is still good against them. Be wary of high numbers of mutalisks, as they will murder scouts.

Heavily armored flying machines, they manufacture robotic Interceptors to attack targets. Carriers can hold 8 Interceptors, and are very nasty if used in numbers. They are the best unit to use around shield batteries, as they can still attack when their shields are recharging. Keep in mind: While carriers have greater range than static defenses, interceptors can be destroyed, so carriers cannot attack static defenses with complete immunity. Interceptors are healed every time they return to the carrier, or when the stop command is given. A big weakness of the carrier (as well as the Terran Battlecruiser, a very similar unit) is a Ghost with the Lockdown ability; once the Carrier is locked down, it cannot move or attack, making it virtually a sitting duck, so be wary if you happen to spot your enemies using Ghosts.

Small robotic fighters with limited range which are spawned from Carriers and cost 25 minerals each. They fly randomly and then all rush the target at once and shoot it and disperse. Can easily confuse an enemy as to which one to hit, and seeing tons of these things flying around can have a noticeable psychological impact on a human opponent. The solution, of course, is to attack the carrier, making all of its Interceptors self destruct. Interceptors take 20 seconds to make.

Spell-caster, an Arbiter casts a cloaking field on groups of units underneath it. Its powers are Stasis Field, which freezes enemy units over a large area, making them unable to attack or be attacked, and Recall, which creates a wormhole on any area of the map that units can enter, returning them to the location of the Arbiter. You can't cloak an Arbiter with another one, unfortunately. The Arbiter takes a whopping 160 seconds to warp in, which is tied with the Terran Battlecruiser for the longest time to build.